The Cranes are Coming! 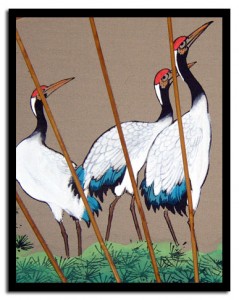 Every year during early spring, bird watchers from all over the country gather around Lake Hornborga in southern Sweden, some 150 km north-east of Gothenburg, to see the extraordinary dance of the cranes. And there is dancing to be seen! Last year, the number of cranes peaked around 3 April, when no less than 13.800 cranes were spotted by the lake (the spotting, of course, being done by the bird watchers, not the lake). That is slightly fewer than the 2009 peak, when a total of 18.500 cranes were counted on 1 April.

While the cranes were late in arriving last year, this year appears to have them following their traditional timetable more closely. By this time last year, the official crane count had only reached the 2.600 mark, as compared to 4.600 this year and the record 8,000 of 2009. Their numbers are growing quickly now, with 1.200 arriving between Friday and yesterday.

If you are interested in heading over to lake Hornborga to watch the cranes dance, the official English website may be found here. At the website, you will also fine a live video feed, but it is not quite the same as being there in real life.

You can get to lake Hornborga by taking the train to FalkÃ¶ping and then changing to bus number 203 towards Skara. You will want to get off at a bus stop called âTrandansenâ (âDance of the Cranesâ). Bus timetables may be found at vasttrafik.se/en.