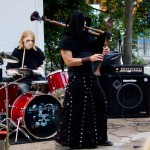 Earlier this summer, local medieval metal band Black Magic Fools (BMF) impressed me with a fantastic live performance at the annual Gothenburg Culture Festival. I normally listen more or less exclusively to opera and classical music, so I was greatly surprised not only to find myself staying until the end of their first performance, but also to find myself returning for their second concert later that evening. Instruments, music and visuals came together very nicely indeed, and when the darkness of the night covered the city, there was even a fire show to marvel at.

If you are interested in their music, you can visit their MySpace site at http://www.myspace.com/blackmagicfools. There you will also find information about future performances and so on.

BMF will be one of several bands to perform live at Parken on 3 August. The entry fee is 90 SEK until 11:00pm, and after that the price is raised to 120 SEK.