City Beat: The Hammarkulle Carnival 27-29 May 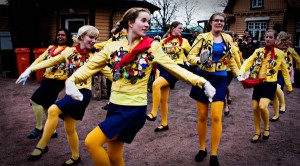 The Hammarkulle carnival has been occurring annually since 1974, with the exception of a two-year break towards the end of the 1970's. Nowadays the carnival attracts around 40.000 visitors a year, from Gothenburg and from all over Sweden. Many local music groups, dance ensembles and the like focussing on folk music and traditional dances from all over the world participate, making the carnival truly culturally diverse and magnificently colourful.

The carnival, as the name suggests, may be enjoyed in Hammarkullen, at the Hammarkulle square. An international market where food and various items from countries around the world will be sold initiates the festivities, and then the music begins. It is definitely worth the visit, if you have the time.