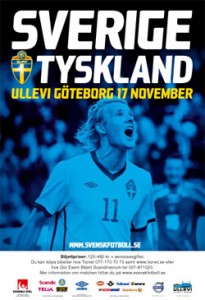 Next week Sweden and Germany's national teams are playing each other in football, right here in Gothenburg! It's a training match so the result doesn't mean the doom of either team, but it should still be a good game. If you ever opened a newspaper or looked at a TV in Sweden earlier this fall, you know about all the fuss surrounding Zlatan Ibrahimovic lately, and that he is considered the best Swedish football player of his time. Maybe you are interested in seeing him in action next week.

If you can't make it to the game, the public has a chance to watch the Swedish team practice the day before the match. That's Tuesday, November 16. It's open to the public; the entrance is in sections L and M of Ullevi. To clarify which Ullevi, it's Nya Ullevi, that is the one that was built in the 1950's. Got that? Sections L and M are on the side by Ullevigatan and Ullevi Norra tram stop.