City Beat: Santa Clauses on the Streets of Gothenburg on Dec. 4 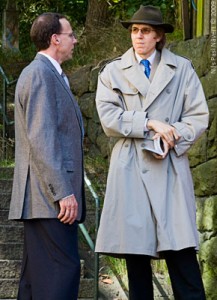 â â¦, or would it be Santa Clausae?
I found the question curiously unsettling, as if somewhere deep down I didn't want to even consider the possibility that Santa Claus would conform to the inflection rules of old latin words ending in -us.
â In any case, the young man continued, there will be lots of them on the streets. You may expect some, uhm, choirs as well, and, ah, maybe some ginger bread and glÃ¶gg.

As an officer of the Beat, the City Beat, I knew when I was on to something, and this was definitely it. Besides, my informant had that determined look he always wore when forced to say something beside the usual casual remark on the weather. It was a sure sign that I was very much on, and not so much off.

â On Saturday, then? I enquired further, to confirm my suspicions.

â The 4th, aye, that's the day, he said, taking another sip of hot tea from that old, yellow mug of his.

â Alright, I said, standing up and reaching for my hat. I will tell tell them.


And now I am telling you, or rather, now I am writing about it. Basically, you will want to keep an eye out for Santa Clauses on Saturday (4 Dec). There should be quite a few of them roaming around in the central areas of the city. Apart from the Santa Clauses spreading that warm, cosy Christmas atmosphere to all corners of the city, there will also be live choir singing on the streets, as well as 'glÃ¶ggstationer' where you can buy gingerbread and glÃ¶gg.

If you did not have a reason to visit the city on Saturday before, I'm sure you have one now, right? : )