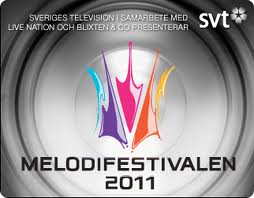 Melodifestivalen is Sweden's music competition that hundreds of Swedish vocal performers applied to be a part of. Throughout February and March the chosen competitors will perform in different cities throughout the country (Gothenburg included!) and the people's vote will decide who goes to the finals. The winner of Melodifestivalen will be Sweden's representative for 2011's Eurovision Song Contest. Melodifestivalen has been running since 1966 and is one of Sweden's most popular TV programs. In 1974 ABBA won, and made Sweden proud by winning Eurovision as well.

In Eurovision each country sends a representative and as the show airs Europe picks who gets to go to the finals. The winner will have a huge boost in his or her career and of course make their country proud! It's not really like the "Idol" singing competitions because competitors in Eurovision tend to already be somewhat known in their country, instead of total amateurs like in Idol.

So anyway, the point here is that you can attend Melodifestivalen live in Gothenburg at Scandinavium next weekend. These artists will perform (scroll down to find the Gothenburg group) and compete. Get tickets at ticnet.se.

All at Scandinavium (map). You can get the tickets e-mailed to you as .pdf to print or pick them up at a Ticnet distribution location.

Hope you enjoy it!