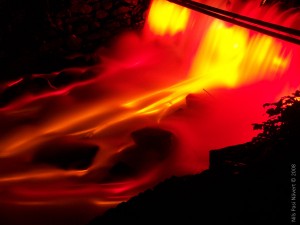 
AlingsÃ¥s, city of light, city of magic. As an officer of the City Beat, I can not help but notice how the nights are growing longer and darker for each day that passes. But then there is that rumor. Stories about a city of light, a city of magic northeast of Gothenburg, where the october lights shines bright and alluringly. Around 65.000 visitors visit the town every year to see the lights, so there must be some truth to the rumours.

Discreet enquiries soon yielded a wealth of information. The event is called 'Lights in AlingsÃ¥s', and it takes place annually around October in one of our neighboring villages to the northeast: AlingsÃ¥s. Every year, a team of light-designers gather in AlingsÃ¥s to design an outdoors light exhibition in the town. This year's team consists of light-designers Andrea Mantello, Jari Vuorinen, Jonathon Hodges, Rafael Gallego, Stefan Graf, and Vladan Paunovic.

As the sun retreats beyond the horizon, and darkness spreads, lights twinkle on in various parts of AlingsÃ¥s. Instead of seeking the warmth and quiet of their homes, people take to the streets to path of the light-walk, a set path that goes past all the light installations of the exhibition. And there is magic in lights, is there not? It sure feels that way when you look upon the creative lighting setups in parks, alleys and house faÃ§ades.

The exhibition will remain open throughout October, so there is still time to see it. And I do recommend seeing it. The exhibition obviously varies in appearance from one year to another, but I have yet to see a Lights in AlingsÃ¥s exhibition which has been less than spectacular.

Info: How to get to AlingsÃ¥s

For more info on Lights in AlingsÃ¥s, visit their official website.