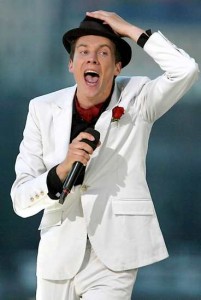 HÃ¥kan HellstrÃ¶m is aÂ  musician from Gothenburg. He still lives here, and one might guess that just by listening to his songs, which are known to have multiple references to Gothenburg. Check out his music on Spotify (more information about Spotify in another Misi article here). Also check his website and Myspace. Some songs of note I recommend are KÃ¤nn Ingen Sorg FÃ¶r Mig GÃ¶teborg, Kom Igen Lena!, Nu Kan Du FÃ¥ Mig SÃ¥ LÃ¤tt, and Jag Hatar Att Jag Ã lskar Dig Och Jag Ã lskar Dig SÃ¥ Mycket Att Jag Hatar Mig. (On that last one, you're probably wondering why the title=all of the lyrics... I don't know either). In my opinion, he is an endearing guy, and you can see even by watching his music videos that he loves what he does and where he is.

He just released a new album titled TvÃ¥ Steg FrÃ¥n Paradise and I found this great music video of a song from the album. This video is great because most of it was candid filming, just walking around town and being met by random fans. You will definitely recognize at least a few places he visits in this video. I recognized him walking down the street I live on in the video. You can hear it in his singing and see it in his expressions that he really loves Gothenburg. One place he visits is Hard Rock CafÃ©, where one of his costumes is on display. You also see him "worshiping" his favorite Gothenburg football team, GAIS.

This Sunday HÃ¥kan HellstrÃ¶m will be at Rockhouse (map), near Domkyrkan, signing autographs and selling his new CD. The signing is at 14.00 and I assume people will be there early standing in line... Fans are also getting excited for his upcoming concert. It will be at Scandinavium on November 6 at 19.30. Tickets are 395sek. Go here to buy them online.

Whether you look up his music, go meet him, see him perform... Maybe you'll discover you love him as much as the rest of Gothenburg does!