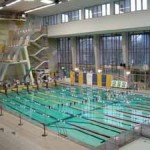 For all of you who does not like to go to Fysiken or go out running you can do like me and take the more comfortable option and go swimming at Valhalla. Every Thursday morning aswell as another random day in the week I go swimming in the only central swimminghall in Gothenburg; and I really tend to enjoy it. On its homepage Valhallabadet actually states itself as one of the biggest indoor bath in Sweden with almost half a million people coming there each year. The bath was opened in 1956 which can be reflected in its style with mosaic in typical 50s style, which, as it always seems clean in there, actually is very charming.

Shower/Relaxing area: The shower areas both have two big saunas a really cold swimminpool to cool off after you have been there, aswell as a small jacuzzi. Those are the basic advantages, and going there with a frien I personally get a really nice start of my day just chilling there for about half an hour before going up. Even if the showerarea is what I really long for, the practice is why I actually go there every week.

Swimming area: In the poolarea there are two big swimmingpools, one for children and one for people wanting to excercice by swimming back and forth to keep themselves in shape. All the tracks in the big pool are 50 metres long, which is really nice as most public baths in Sweden are only 25 metres long.

When to go there: As this basically is the only central bath in Gothenburg the two swimtracks for "normal people" coming there without being in a swimsquad or something like that, the biggest problem is that these two tracks can get crowded easily. If you want to go there I would really recommend the time between 08.00 and 09.00 in the morning, as the tracks are almost empty at that time.

How to get there: Valhallabadet is really easy to find as it is just beside Scandinavium, close to both Avenyn, the Central station and KorsvÃ¤gen. A map can be found at http://www.gotevent.se/valhallabadet/ENGLISH_map.asp.

See you guys there in the morning ! :)