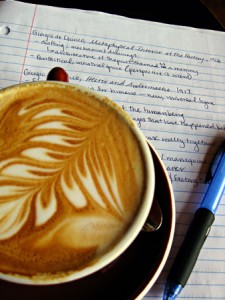 Whether it was Swedenâs distracting winter beauty or a series upcoming project deadlines, this week has felt just a bitâ¦disjointed. I left my lunch at home mÃ¥ndag, I forgot a skype-date tisdag, a symposium melted my brain onsdag, and I was late to Swedish class torsdag. Naturally, between rushing to make trams, putting spoiled milk in my tea, or forgetting to write emails, the only time Iâve been able to successfully collect myself has been when my hands are around a cup of coffeeâ¦

Hence why this week, I will be diving in to the Swedish concept of fika from the perspective of a caffeine-addicted Seattlelite.

Seattle has a large coffee reputation. As the hometown of Starbucks, my old American city is well-known for its espresso snobbery and those iconic white-and-green to-go cups. The rejuvenating aspects of taking a coffee break there is alive and wellâand, actually, contrary to popular belief, much of the lattÃ©-loving populous in the Pacific Northwest avoid Starbucks creations. In fact, I dare go far enough to say they despise it. Almost everyone I know who enjoys coffee in Seattle does so from a local coffeeshop that often is dripping with eccentric cultural sarcasm and fair-trade initiatives. Or, at least I do.

There is simply nothing more soothing for the winter soul than to migrate to a cafÃ© from the depths of white, city mist and meditate on the taste of pearly-brown coffee.

That said, I was delighted to learn prior to moving here that GÃ¶teborg had a strong coffee culture. And though in several aspects these two cities remain very much the same in their love for the drink, there are distinct and lovely differences between the Seattle âlattÃ© breakâ and the GÃ¶teborg âfikaââ¦


Obviously, there are the smaller things, too: lattÃ©s served in water cups (ja!), tea and coffee have the same price (nej!), more crying babies (nej!), maneuvering six faux-bamboo trays on an antique table for three (tetris!), the impossibility of seats with good reading light/outlets (neeeej). In fact, just the other day, I had to master the artful dance of edging around five prams with a very full teacup.

But all things considered, itâs completely obvious to this Seattlelite why GÃ¶teborg is the most espresso crazy city in Sweden. Fika here is a religious experience. And I, am a total convert.