Thought of the Week: Football and Free-Exercise 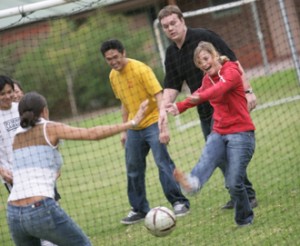 Everyone in the States jokes that all Europeans think about (among other things) is soccerâor, what I will now start correctly refer to as, football. They teased me that Iâd drop my beloved Red Sox for some obscure football team and trot around the town with a vuvuzela (though, Iâd probably do that last one regardless). I didnât think much of my friendsâ jokes at the time, but man, it definitely only took me four weeks in Gothenburg before I joined a weekly football game.

And you know, maybe itâs something in the European air or that pathetic-foreign-kid desire to make friends, I am so happy Iâm playing again. As a child, I started playing football at six years old and continued until pretty much high school, where I was told that only if you were good could you keep playing in tournaments. After that, things petered out. I did cross-country. I tried crew. I even tried fencing. I tried to delude myself I could get over it; there were other sports.

But now that Iâve been playing with a team and getting territorial and competitive with a bunch of other guys (and girls) on a imitation-turf field (rain, shine, cold, whatever), I canât go back. I want to get better and better. And from the whole âuniversityâ perspective, itâs fantastic! I never realized how helpful it is to make yourself play every weekâthose post-game endorphins have definitely carried me through a couple late-night assignmentsâ¦

In all seriousness, though, itâs definitely apparent to this born-again-football-fan that Sweden is a pretty active place. Hallelujah for the biking culture. Praise to the fathers and mothers pushing prams at all hours of the day. Huzzah to the runners, the dog-walkers, the rollerbladers, those people with the walking poles in Slottsskogen. Itâs so easy to be active in this country, and so easy to do so without paying a penny.

I thought about paying for a Fysiken membership, but things you can do for free exercise quickly started to outweigh even the discounted membership cost. Hereâs some suggestions if youâre looking to save up for that trip to Copenhagen:


Anyway, thatâs all for now. Iâm late for my football game. :-)