The Native: The Path to Opera and Classical Music 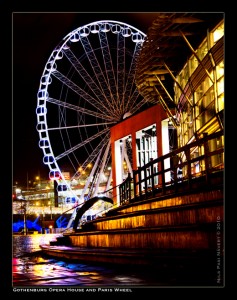 
The movie 'The Hunt for Red October' features a Russian choir in the opening theme, which invariably led me to Amazon.com in search of Russian vocal music. There I found Dmitri Hvorostovsky, whose recording of Russian folk songs was presented on Amazon together with a 15 second preview of the popular Russian folk song 'Kalinka'. What a voice! I was off to the local music store, which had two CDs with Hvorostovsky in stock. One of them was the recording of Russian folk songs that I had found on Amazon, the other was a collection of Russian opera arias (remember, in opera the songs are called 'arias'). I wasn't really interested in opera, so I figured I would go with the more popularly oriented folk song disc. But the thing is, that CD was a collaboration between Hvorostovsky and a Russian chamber choir, which had several tracks to themselves. I, if you remember, was infatuated with the voice more than anything else, so upon closer consideration I figured I would get more voice for my money by going with the opera disc instead. Little did I know at that time, that it would turn out to be one of the happiest decisions I had ever done!

Opera is wonderful! It is all about the voices, the drama, the overly grand. There was a time I wanted nothing better than to become an opera singer myself, and so I started taking lessons. Today, I no longer dream of becoming an opera singer, although I still love to sing and would not turn down the opportunity of a career as a classical concert singer. I love singing, but the commitment required to learn the craft, the expenses and the uncertainties inherent in a professional singing career makes it an art I would rather observe, than be an active part of. Fortunately the paths to the Gothenburg opera house and concert house are much straighter than the path that took me from 'The Hunt for Red October' to the wonders of opera.

We are lucky to have access to both an opera house and a concert house in Gothenburg, and twice as lucky in having these houses populated by outstanding musicians, singers and artistic staff. The operas at the opera house keeps a very hight standard both musically and in terms of decor, lighting, choreography and all the rest of these various artistic aspects that join forces, like the individual pieces of a grand mosaic, to form a singular whole. Similarly, the concerts at the concert house do also offer the highest of musical pleasures. Be it under the baton of critically acclaimed principal conductor Gustavo Dudamel or one of the other outstanding conductors, the Gothenburg Symphony Orchestra continues to impress. As a student, you can get away quite cheaply too, with a typical concert ticket costing you no more than 100SEK, and an opera ticket going as low as 75SEK, although you may want to pay more for a slightly better seat.

Of course, it takes more than just availability and good prices to do something. After all, the low price and wide availability of a 5mm screw does not necessarily mean that I will buy one. I have to have a reason, and if you have never been to an opera or classical concert before, you may wander why you should take the opportunity to do so now. Well, as someone who became an opera fanatic by watching 'The Hunt for Red October,' allow me to put in a few good words on the topic of why opera is worth your time. Let's go through what I call the 3 aspects of opera.


The 3 aspects of opera

First of all, you may have listened to opera on the radio or maybe even seen it on the TV. Most likely, it will have been part of a movie, or maybe it was a televised concert with Pavarotti. In either case, let us not forget that opera is not just singing, or just about the music. Opera is a collaboration, or a blend if will, of several artistic trades. We have theatre, which is to say acting, choreography, decor and set design, lighting and all of that. This is a very significant dimension of the opera that does not translate well onto film, and does not translate at all onto radio broadcasts or other sound recordings. In fact, it is a dimension of opera that, I would argue, can only be experienced fully at the opera house. Nowhere else can you feel the faint smell of the smoke from the smoke machine, feel the atmosphere in the hall, move your eyes to wherever you want on the stage. As someone who likes to take photos, let me also assure you that modern technology does not come close to recreating what your eye can see.

But what about what you can hear? Sorry, but you really have not heard opera until you have been there and listened to it live. Why is that? Quite simply because opera is one of few genres where you get to hear the full extent and power of the human voice un-amplified. There are NO microphones amplifying the voices in opera. That is why I dislike outdoor opera concerts, because it simply is not opera! No matter how much the microphones and loudspeakers cost, the sound will be vastly different coming from loudspeakers, as opposed to coming directly from the singers' mouths. It is a remarkable experience, and I have to admit to finding it difficult to listen to amplified voices since starting attending opera performances on a regular basis. There is simply nothing more beautiful to my ears, than that of un-amplified, human voices used to there fullest.

Lastly, having covered the visuals and the sound, there is one third aspects that I should like to bring up. This one sort of goes hand in hand with the first, theatre, but nonetheless deserves its own paragraph. The lyrics do set opera abort from most other music genres. WHy is that? Well, it is because opera originated within classical theatre, which means that each opera has a story to tell. You know this already, but have you considered the consequences? Of course, most songs have something they wish to say. Very seldom do you find composers who had nothing to convey with their compositions, but in opera it is taken one step further: it is set into the context of a complete story. Thus, when I listen to the final scene of GIacomo Puccini's opera La BohÃ©me, I am often close to tears. For when one of Rodolfo's friends sings 'Curragio' (courage) in a low voice, and Rodolfo soon thereafter cries out 'MimÃ­, â¦ MimÃ­!', I know not only that MimÃ­ has died, but through the story up to that point, I know exactly who MimÃ­ was. I have seen her meet Rodolfo for the first time, I have seen them fall in love with each other, I have seen them happy, and I have seen them struggling. I have been there as MimÃ­'s health has deteriorated, and finally I am there in the final moments of her life, when she dies, and when Rodolfo collapses at her side shouting out her name in utter despair. So, with opera, there is an emotional attachment that I simply do not find with any other genre, including classical songs that were written separately, i.e. are not part of an opera.

Of course, it can be difficult to understand the story if the opera is performed in a foreign language. Indeed, it is difficult even if it is not! At the Gothenburg opera house, a text machine provides a Swedish translation for everyone who speaks the language. There is also a booklet you can buy with an English summary of each act and scene, so that you can follow along in the story even if you cannot understand what they sing, or read the Swedish translation on the overhead text machine.


The 3 aspects of classical concerts

For concerts, of course there is no overall story to pay attention to. Usually, there is no elaborate set design and decor either. The musicians just sit there and play, and if there are singers present, they stand upfront and sing. Still, the sound aspect does apply here, just as it does with opera. A couple of years ago I saw Carmina Burana. I bet you know it even if you don't recognize the name, as 'O Fortuna,' the choir piece that opens and closes Carl Orf's Carmina Burana, has been used in so many movies and tv-series over the years that it is almost impossible not to have heard it at least once! Anyhow, I saw it live for the first time and decided that I would have to get it on CD or DVD. SInce then, I have listened to countless recordings, and they just do not come close of making the music justice! Why is that? Well, it is because of the dynamic range.

Wikipedia offers a good, short explanation of dynamic range, stating that it is 'the ratio between the largest and smallest possible values of a changeable quantity' (Wikipedia). In terms of sound, what that refers to is the sound range between the loudest and quietest sound. In practice, what this means is that while the human ear has no problem with huge difference in volume between the loudest and quietest sounds of Carmina Burana, the recording equipment does. Or maybe it is the home stereo systems that have a problem with it? I don't know for sure, but the recordings I have listened to have either been too flat, i.e. not enough difference between the loudest and quietest sounds, or too wide, i.e. I have to change the volume all the time. It is a difficult, perchance impossible, balance to strike, and it leads me to the conclusion that you haven't really heard classical music until you've been there, in the hall, listening to it live un-amplified by modern technology.

A final point to bear in mind when going to see an opera or classical concert: opera has been around since 1594, and classical music even longer than that. There are lots of different genres within opera and classical music, many of which are vastly different. That makes it really difficult to recommend some work to listen to, but here's a list of my five favorite operas:

Questions, suggestions, opinions â you know where to find me (in the forum or comment section here on Misi.se!).