The Native: Live Music in Gothenburg 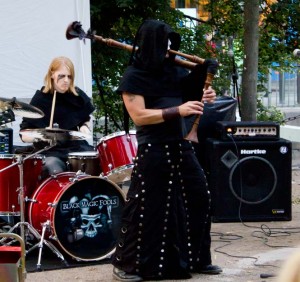 When I was in Sapporo, Japan, I used to walk down to a long, several blocks long, covered pedestrian street flanked on both sides by small shops and restaurants. There was always something going on there. When the shops were open during the day, the street was full of people buying or just browsing the wares on display, and in the evenings, once the shops had closed, the street filled with the sounds of singing and music.

Sometimes there were so many street-musicians, or street bands, that they would settle down as close to each other as maybe 15 yards. Each group had at least a couple of listeners sitting on blankets or on the bare ground in a semicircle in front of the performers. If I had to guess, I would say that everyone, audience and performers alike, were in their twenties, which made the experience extra unique. I have never seen that anywhere else in the world. Because I had curfew at 11 at the dormitory where I stayed, I could never stay and listen for as long as I would have liked to, but some of these street performers were really good!

In London, of course, we have Covent Garden, which is well-known for housing the Royal Opera House, as well as being a place to go for live street performances. The few times that I have been there, clowns or other comedians have performed on the open square outside the market area. What did surprise me on two occasions, though, was to hear classically schooled sopranos perform opera arias and classical songs in a small inner courtyard. Once again, first class singing!

Back to Gothenburg and, well, we cannot exactly boast of a wealth of street musicians, can we? Sure, there seem to be a number of accordionists in Gothenburg. There is a pair â one on accordion and the other on trombone, I think â sometimes performing on Avenyn near Valand that I like to listen to as I pass by. They often play Moscow Nights, the famous Russian song that seems to have, and rightly so, spread to the farthest reaches of our planet since it was written in the mid 20th century, I believe. I also once heard a very accomplished young violinist perform neapolitan folk tunes in the subterranean tunnel between Nordstand and the train station. But other than that, there is not much to speak of. There is simply no one place you can go to, like Covent Garden in London or this pedestrian street in Sapporo, the name of which escapes me at the moment. Sometimes I miss that.

So, where do I go for live music? Obviously the opera house and the concert house, which I will cover in greater detail next time, but for local artists, I turn to the churches. There are always lots of concerts and recitals in the churches in and around Gothenburg, and not all of it is religious music (although, if you are looking for rock, metal, reggae and so forth, you will probably not find it here). I have been to Russian folk concerts twice, for instance, both of which were really good and neither of which can be called a religious concert. Not that I have anything against religious music â I am just saying that there should be something for everyone.

Although the website is only available in Swedish, this is a good place to go when looking for events taking place in Gothenburg. I found a Celtic christmas concert that I simply have to attend (if I can) at Annedal's Church on Dec. 11, for example. It is really easy to browse events according to type and genre, so if you know the Swedish word for the genre you are interested in, the site should prove useful despite it being available only in Swedish. Heres a LINK.