The Native: Let's Eat some Semlor! 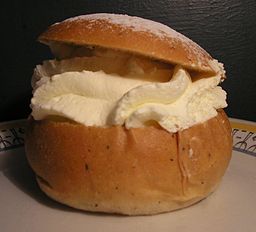 You've probably seen them. Indeed, it is hard not to, given the way they show up in grocery stores and cafÃ©s every year around this time. They're quite tasty too, which is probably why they keep showing up earlier and earlier for each passing year. I can definitely recommend them if you like sweet things!

A cardamom-spiced wheat bun, with the top cut off to give room for a layer of almond paste and on top of that whipped cream, constitutes the base of the semla. The cut-off top of the bun, sprinkled with powdered sugar, resides at the very top giving the semla a certain likeness to a hamburger. I'm no expert on healthy and nutritious food, but I'd wager neither a semla nor a hamburger belongs to the most healthy and nutritious kinds of food, but at least the former tastes very, very good indeed!

Technically speaking, we're supposed to eat semlor (plural) on a specific day which, this year, happens to be the 8th of March. That's because the semla was originally a festive food eaten on the Shrove Tuesday just prior to the Lent. Since then it has sort of become tradition to start eating semlor in early February, even during years when the day of the semla happens to take place in March. It is for this reason we (Misi.se) have decided to write about the semla now, rather than wait until the 8th of March. That way, you will have time to eat lots of semlor and savor the wonderful taste.