The Native: Let it Snow! A 'New' Song to Learn 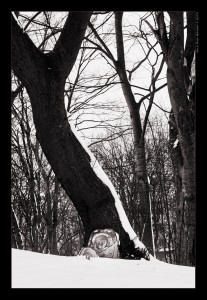 There is always so much to do around Christmas. For me, just like for many other Swedes, learning or re.learning old or new Christmas carols and other songs is just one of those things you do at this time of the year. Yes, I shall participate in a Lucia procession this year as well, and invariably it means learning new songs.

In my case, the 'new' song is not particularly new. Sammy Cahn (lyrics) and Jule Styne (composer) wrote 'Let it snow' back in 1945, in Hollywood, during a particularly warm day. I guess they were dreaming about cooling off in the snow. Being so old, I guess it isn't particularly strange that I should have heard it before, but when the other choir members suggested it for the program, I honestly couldn't think of where I'd heard it. It took a while, but then it dawned on me: Die Hard (movie).

Of course, in Die Hard, I don't think you get to hear the entire song. At the very least, I certainly don't recognize all of the melody, which makes it jolly difficult to sing. Not having access to a piano right now, or the sheet music for that matter, I decided to open up iTunes and see what I could find. The Vaughn Monroe recording is there, of course. He was the first to record 'Let it snow', and it is his recording they used in Die Hard â naturally I bought it. Bing Cosby's recording sounded good, but I figured I could probably make due with one recording. Nonetheless, I did listen to previews of Dean Martin's and Frank Sinatra's recordings as well.

Before shutting down iTunes, I did, however, stumble upon a second recording that I simply had to buy. 'Let it snow' performed by The Three Tenors, which is to say: Luciano Pavarotti, PlÃ¡cido Domingo, and JosÃ© Carreras. I'm not sure what to say about their recording. It is expressive, it is wild, it is all over the place â and I really like it. It isn't really 'Christmasy', but it certainly has spirit. I'd recommend it for an out of the ordinary 'Let it snow' experience.

Now it's back to practicing for me. Take the chance, you too, to learn some Christmas songs while you're here, but let them be Swedish. That way you can impress the folks back home when you get back! : ) And remember: you can always borrow recordings free of charge at the public libraries!