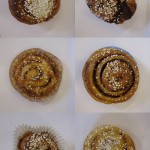 October 4th is the day that the whole country of Sweden dedicated to the delicious Kanelbulle (cinnamon bun). We from the Misi.se team also want to express our admiration and collected some information which guides you through the day.

First of all we have one episode of the Wonder Chef who will give you instructions on how to make traditional and perfectly delicious Kanelbullar.

If you don't really feel like baking - no problem! Five curious Misi members have tested Kanelbullar from different places in town. See our test here.

Kanelbulle 1: Brogyllen
Price: 14 SEK
Smell : Rich cinnamon smell, maybe because the Kanelbulle was made with cinnamon from Sri Lanka as the shop assistant highlighted when we bought it.
Cinnamon Flavour: Even if it was a very strong cinnamon flavour the team agreed on that this Kanelbulle was not oversweet and not dry either. The team also discussed lively if the taste of cinnamon made it too bitter. Half of the team preferred the Kanelbulle to be a bit bitter than an oversweet sugar-chock.
Softness of the dough: Simply a perfect, soft dough (everybody agreed on that)
Remove the paper : Good but some cinnamon sticked to the paper. Some parts might even stick if you remove the paper to fast.
Appearance/sugar distribution : Outstanding look. We had a hard time discussing if it looked burnt or pretty. The sugar was only on one side of the Kanelbulle, maybe that also influenced some members with a bitter tasteâ¦

TOTAL 5 of 5 bulle-proof!!
Our favourite! Even if it didnât look like a classical bulle we were all convinced by its taste and price!

Kanelbulle 2: AhlstrÃ¶ms
Price: 15 SEK
Smell: Quite a poor smell â not much of cinnamon.
Cinnamon Flavour: It looked better than it tasted â so much about itâ¦ The inner layer was nice, the middle layer so-so and the outer layer was dry and doughy.
Softness of the dough: When we cut it, it fell apart and looked very dry â and it tasted dry as well.
Remove the paper: The paper sticked!! At first it was easy to remove but the last part sticked to the Kanelbulle and we had to stretch the paper away.
Appearance/sugar distribution: This Kanelbulle had the classical look and perfectly distributed sugar (even on the sides). It was exactly how you imagine a Kanelbulle. Although it looked a bit dry.

TOTAL 1 of 5 (appearance helped on that decision)
Even if this Kanelbulle had the perfect look , the inside did not convince us at all. The paper sticked, it had only a light cinnamon flavour and was very dry.

Kanelbulle 3: Seven Eleven
Price: 16 SEK
Smell: It smelt more like yeast and dough than cinnamon.
Cinnamon Flavour: A VERY sweet Kanelbulle. At some point we were not sure if we tasted cinnamon because of the very sugary taste. One poor test panel member even got a piece without any cinnamon at all.
Softness of the dough: VERY soft
Remove the paper: No paper â no problem
Appearance/sugar distribution : VERY pale and boring look. We wondered if this one was fully baked.

TOTAL 3 of 5 â okay
Even if this Kanelbulle looked a bit pale and boring â it was actually quite okay.

Kanelbulle 4: Muffins mm.
Price: 16 SEK
Smell: We couldnât smell any cinnamon, the dough smell was too strong
Cinnamon Flavour: The Kanelbulle was very soft and had only a sweet bread taste, we couldnât taste much of cinnamon. So, it was a lot of dough, also considering the immense size of it. When we cut it open we could not see much of a cinnamon filling either.
Softness of the dough: Very soft.
Remove the paper: Perfectly easy.
Appearance/sugar distribution: Fluffy and giant, very high and fat, those were our first thoughts when we looked at this Kanelbulle. There was a lot of sugar in the middle. We also wondered how the inside would look like â was it really such a big piece or were there some air bubbles in the middle? (it was actually big).

TOTAL 2 of 5 for big mouth people
This Kanelbulle was BIG and could have easily been shared by two people. Unfortunately it tasted dry and sweet and not much of cinnamon.

Kanelbulle 5: ICA
Price: 8 SEK
Smell: Did we smell vanilla?
Cinnamon Flavour: This Kanelbulle didnât have a strong cinnamon taste but surprisingly it tasted vanilla â actually extremely vanilla. Also the cinnamon filling had some jelly-structure. There were also no signs of cardamom in this Kanelbulle.
Softness of the dough: A bit dry.
Remove the paper: Top marks
Appearance/sugar distribution: We were amazed by its glossy look. Moreover, it had a nice freshly baked look, even if the sugar didnât look that fresh.

TOTAL 1 of 5
It would probably work as a vanilla-bulle but it didnât convince us as a Kanelbulle.

Kanelbulle 6: Biscuit
Price: 20 SEK
Smell: At least, there was a hint of cinnamon.
Cinnamon Flavour: This Kanelbulle tasted very sweet and very doughy as well. It was even a bit crunchy or as some proposed burnt. This Kanelbulle did not exactly amaze us by its cinnamon flavour.
Softness of the dough: It was quite hard to cut.
Remove the paper: Sticky but okay.
Appearance/sugar distribution: We thought this small-size muffin-wannabe Kanelbulle had a very personal touch. It looked clearly homemade. The team agreed on that it is a good option if you need a compact Kanelbulle which does not need a lot of space in your bag.

TOTAL 1 of 5
It is a cute homemade Kanelbulle but being the most expensive of the test, we donât think we got good value for the money.

Well, all in all the test was a bit disappointing because we only found one Kanelbulle which we really liked. Therefore, our recommendations is to do Kanelbulle on your own!