Living in Gothenburg, one canât escape to notice the city dish; Whole & Half Special. Many stories on how the dish was created have wandered around the city in different forms. 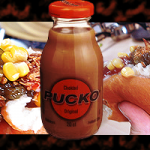 One story that has been officially published is the one about Albert Johansson who ran one of the hotdog stands during the 1930âs. He was visited by two men who asked for a hot dog each with some mashed potato on top of it. They returned a week after to the hot dog stand and asked for that âspecialâ dish, the name was born to the dish.

Then what is a Whole & Half Special?

One can have the dish with just hotdogs and mashed potato, but many choose to add extra toppings. One can have everything between roasted onions, gherkin to shrimp salad it is really up to oneâs imagination on what to have on the Gothenburg dish.

To the dish it is common to drink chocolate milk, most often the one that goes by the name of Pucko. Â (The word Pucko also means idiot)

So why not try a Whole or Half Special today? Find out why so many in the city of Gothenburg and outside love it so much.

Two Classical places to go where the Whole & Half Special have their special stories: