Saturday Special: Voices from a Distance 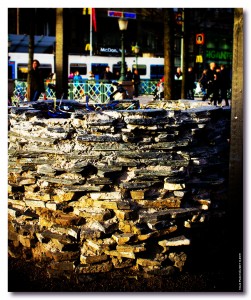 
In Brunnsparken, there is a well unlike most wells. But before I get into that, did you know that the name 'Brunnsparken' actually is a compound word? It's true! It is a combination of the Swedish words 'Brunn' (well) and 'Park' (park), so I guess a literal translation would be something like 'the park of the well'. Maybe it makes perfect sense, then, to find a highly unusual well in this park.

Through the depths of the world, through darkness, light and molten rock â somewhere it forks into two passages, then three. With one well in South Korea (Incheon, Seul), two in India (New Dehli and Bangalour), and one in Sweden, it is said that words spoken into one of these wells, will be heard by anyone standing close to one of the other wells. Have you ever stood by the well in Brunnsparken and heard a voice you could not trace? Has that voice spoken a language you did not understand? Maybe someone in India or South Korea spoke into another well at that time, and what you heard was the echo of a distant soul. It is a fascinating thought, is it not?

The well was constructed in 2008 as part of the art project 'SportCity', and was designed by Mandana Moghaddam.