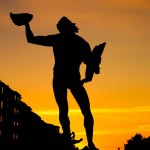 ABBA. I guess you have heard about them, or even heard them. To say that they have an album or two out there on the world market, would be a very grave understatement. I cannot really say how many records they put out while they were still performing together, but they were quite prolific. And they were good. It is quite surprising just how many good songs they made. Usually, bands will have their ups and downs, but ABBA continuously produced music of the highest standard.

WIth the 2011 Eurovision Song Contest finale being broadcast tonight, I thought it a good time to post another of those silly Q&A (Question & Answer) sessions, this time on the topic of ABBA.

A) While ABBA, the band, certainly is not canned fish, it is true that there is a Swedish company with the name ABBA, and that they produce canned fish. Abba, the band, has nothing to do with the canned fish, though. It is an acronym of the band members' first names. Agnetha FÃ¤ltskog, BjÃ¶rn Ulvaeus, Benny Andersson and Anni-Frid "Frida" Lyngstad. Abba, in short.

Q) It is getting warmer now. But in Australia, winter is approaching. I heard this rumor that ABBA are Australians in disguise. Is this true?

A) While we don't quite see the connection with the weather thereâ¦ No, it is not true. Anni-Frid was born in BjÃ¸rkÃ¥sen, which is in Norway, but moved to Sweden at a young age. The rest of them are Swedes. BjÃ¶rn was born in Gothenburg, actually, Benny in Stockholm and Agnetha in JÃ¶nkÃ¶ping.

Q) There are two male heroes and two female heroes in Mozart's opera Die ZauberflÃ¶te, and they become couples. Do you see the connection there? I think Mozart's opera is about ABBA! What do you think about that?

Q) I heard that ABBA competed in a song competition. Twice! Did they sing?

A) While we would be curious to hear what else a competing band in a song competition could do, you are correct that they competed in the Eurovision Song Contest. The first time, in 1973, they finished third in the Swedish selections for the European Song Contest, so they did not make it into the actual contest. 'Ring Ring,' the song they were competing with, did become a hit both in Sweden and in many other European countries.

The second time they competed was in 1974, and this time they not only made the finals in Brighton, but they won the entire competition. The winning song was 'Waterloo', and you can see and hear the performance on YouTube.

Q) After that, ABBA was an instant success, right?

A) While we're unsure of what 'that' refers to in this case, you are right that they were hugely successful, touring as faraway countries as the USA and Japan.

A) While we're slightly confused by your writing ABAB, we take it that you meant ABBA. Unfortunately, ABBA decided to take a temporary break in 1982, with BjÃ¶rn and Benny focussing on writing musicals, including the famous Chess, and Agnetha and Anni-Fri pursuing solo careers. They've yet to 'break that break', if you excuse my poor attempt at humor.

Q) Could you answer this question last?