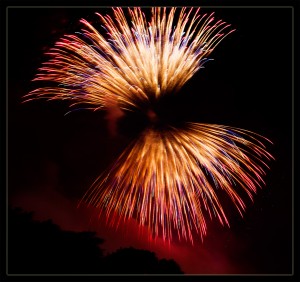 'The Countess and the manservant' would probably be an acceptable translation of 'Grevinnan och BetjÃ¤nten,' a short British sketch that has been broadcast every year on New Year's Eve in Sweden since 1969. This short black and white sketch is also part of the traditional New Year's celebrations in at least 10 other countries, none of which is the UK. In fact, despite being british, it has never been broadcast in the UK. Let us have a look now at some typical Swedish activities on New Year's Eve.

Every year, GÃ¶teborgs Posten (the Gothenburg daily mail) organizes a big fireworks display on Hisingen in the Gothenburg harbour. It is quite large by Swedish standards, usually lasting about 15 minutes. I used to think that this was about as large and grand as it gets, but having spent the summer in Japan where I experienced two hanabitaikai (fireworks festivals), both of which lasted four times as long, I've come to realize that maybe it does not rival the greatest out there. Still, it is grand, and considering it takes place mid winter in what is sometimes supremely cold weather conditions, 15 minutes isn't that bad. The low temperature does result in a great deal more smoke, though, than the Japanese hanabitaikai which take place during the summer season, so if you're taking photos, try to get some good ones early on before a thick layer of smoke has formed.

At 7:45pm, SVT1 will broadcast the short british sketch I touched upon earlier. As it is british, the dialogue is in english, which makes it easy to see even if you don't speak Swedish fluently yet. The sketch is really fun, only 15 minutes long and highly recommended. If you don't have a TV, you can find it on YouTube. When midnight approaches, those with a television set often listen to the live countdown from Skansken in Stockholm.

Although people will fire individual pieces of fireworks sporadically throughout the day, it isn't until midnight the sky lights up in earnest. At this time, it is usually very difficult to get through with text messages (SMS) to friends and family. I haven't tried calling anyone's mobile phone at this time, but I wouldn't be surprised if that too turned out to be difficult. The air is simply full with 'Happy New Year!' messages sent to friends and family. Of course, the new year is also commonly welcomed with a glass of Champagne (or Pomac?).

For reference: The photo at the top right hand corner shows a hanabitaikai (fireworks display) in Tokyo, 2010. Shutter: 8sec; Apeture: 9.

And now, Gina from the City Beat follows up with some parties. 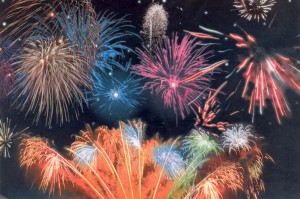 The last night of 2010, tons of options to celebrate...Â Like most cities, Gothenburg has its own public New Year's Eve celebration. At GÃ¶taplatsen at 23.20 tonight you can go join in as they say goodbye to the Julstaden and count down to 2011. Remember, you aren't allowed to take any fireworks with you!Â There are a lot parties tonight to choose from but here is a small list from some popular places...