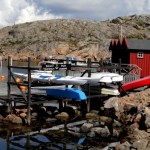 Gothenburg is a very varied city. You can find lots of different things such as shopping, cosy cafes, entertainment and nature within a short tram ride. If you are looking for a beautiful location that is not too far away from the city centre but calm and in the nature: the archipelago is it! Popular with both tourists and locals, this is a fantastic place to hang out, have a picnic or bbq, enjoy the nature, take walks and if the weather allows it, you can even swim there. A warm and sunny summer days is probably the best option to see the archipelago but it is actually an all-year-round attraction. The sight of the snowy archipelago in winter is just amazing!

There are over 30 small islands in the southern archipelago. All of them are hard to pronounce if you are not a Swedish-speaker. But keep in mind, the âÃ¶ at the end of the name stands for island. On most archipelago islands there are no cars allowed. Most people ride a bike or a very special âisland-bikeâ which is a motorbike with some loading space at the front (you just have to see it). Even if the archipelago islands were already mentioned back in Viking times, they became very popular from the 1930s onwards. That was the time when a holiday regulation was established and more and more people were looking for summer houses. Still today, there are many summer houses and the islands are quite empty during the winter months.

But what can you see and do on the islands? We will concentrate on the southern archipelago as it is best to reach by public transports. Take Line 11 to Saltholmen and then jump on a ferry toâ¦
BrÃ¤nnÃ¶
BrÃ¤nnÃ¶ is perfect for walking. There are nice paths and lots of cute houses all around. If the islandâs paths are not enough for you, you can simply head towards the next island GalterÃ¶. But actually BrÃ¤nnÃ¶ is most famous for folk music. On Thursday evenings in summer, people often meet at the quay to dance. The famous folk singer Lasse Dahlquist has a very strong connection to BrÃ¤nnÃ¶. On BrÃ¤nnÃ¶ you can find a little museum, you can rent a bike and in winter there is also a Christmas market on the island.

VrÃ¥ngÃ¶
From many people I have heard that VrÃ¥ngÃ¶ is the most beautiful of the archipelago islands. The island is very influenced by the long tradition of fishery there. On the west side of the island, you will find the old town which resembles the harbour environment of the 1930s. On VrÃ¥ngÃ¶ there is a large nature protection area and many possibilities to swim. In the southern part of VrÃ¥ngÃ¶ you can even see some seals.

StyrsÃ¶
Also on StyrsÃ¶ you will find many walking paths, nature protection areas, bathing areas and also parts of the old fishing village called StyrsÃ¶ TÃ¥ngen. Much has happened on the island since the 1930s when it was known as a smelly fishing village because of the processing for herring there. Today, StyrsÃ¶ has a very well built infrastructure and is even connected to the island DonsÃ¶ through a bridge. There are even numerous cafÃ©s and galleries on the island. If you come to StyrsÃ¶, you should not miss the fantastic view from the highest point of the archipelago, Stora RÃ¶s.

How to get there? Take Line 11 (Saltholmen) to the last stop called Saltholmen
From there you can even take some ferries to the small islands. But the archipelago around Saltholmen is also very beautiful and worth a visit.

How much does it cost?You can use a regular VÃ¤sttrafik transportation ticket to both use the tram and the ferries. You donât have to buy any other additional tickets. A ticket for âGÃ¶teborgâ is enough, so everything from an SMS-ticket over a regular one-way ticket to a 3-month subscription works fine.


Tips for a perfect day at the archipelago