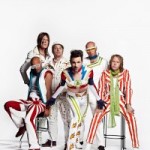 There is something remarkable about Sweden and its music. There are a lot of famous and appreciated singers and band, regarded to the relatively small population. From today until the end of the weekend you have a great opportunity to experience some very popular Swedish artists live on stage.

THE ARK
The Ark is not only famous for their songs but, of course, also for their looks. They are known for their very colourful and outstanding clothes. But that is not strange as they state Glamrock as one of their most important influences. The band was founded in 1991 and since then they have released five records. They had their breakthrough in 2000 with their record âIt takes a fool to remain saneâ and they even represented Sweden at the Eurovision Song Contest in 2007.

Unfortunately The Ark decided to end the band at the end of this summer. They will play their very last concert in Copenhagen in mid-September. So, use this opportunity to see them live at Liseberg!
The Ark, Thursday 25th of August, 8pm, Liseberg (Entrance 90 SEK, annual pass 195 SEK)
Official website

TOVE STYRKE
Tove is a young singer from UmeÃ¥. With only 18 years she has already released a couple of singles and her first album. Actually, she became famous through the Swedish âIdolâ show where she ended up on the third place. However, her music is not very typical for the Idol show and she reminds many critics of Robyn and Lykke Li in some way. Even the New York Post listed her as one of the â10 artists to know in 2011â. See her concerts and make up your own opinion.

TIMBUKTU
Timbuktu or Jason DiakitÃ© is one of the most famous Swedish hip-hop artists. The most beautiful thing about his music is his SkÃ¥ne-accent, in my opinion. He released eight albums so far and his latest one came out in June. That means that you can hear his songs very frequently on the radio. But not only his songs, Jason even leads his own radio show on the channel P3. So, if you like hip-hop (or SkÃ¥ne-accent) you should not miss his performance, together with his band Damn! And Hoffmaestrio
Timbuktu and Damn!, Friday 26th of August, 8pm, TrÃ¤dgÃ¥rden (Entrance 350 SEK)


HOFFMAESTRO
Hoffmaestroâs music is not easy to put into any category. On their website they describe their style as unrestricted combination of Ska and Reggae, Techno, New Orleans-funk and Country (among othersâ¦). Hoffmaestro is also said to be a fantastic live band with concerts where the audience gets involved, as well. Another interesting fact about Hoffmaestro is that had their breakthrough with the film âStockholm Boogieâ in 2005. They wrote the screenplay, directed the movie and, most of all, produced the soundtrack to the movie.