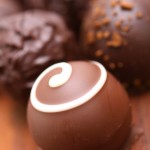 Gothenburg is often described as Scandinaviaâs event city. Throughout the year, there are plenty of events and festivals in town: just think of the Film Festival, Kulturkalas, Gothia Cup, Kulturnatta, just to name a few. Soon there is probably the most fun and certainly the most delicious one coming to town: the Chocolate Festival. It will take place at the City Museum from Friday until Sunday.

What can you do there?
Many companies will present their products during the festival and offer some proper discounts and special offers. The festival is not only about chocolate, but also about many other delicious foods. You can find liquorice, Whiskey, olive oil and much more on the three floors of the City Museums. Of course, there should be coffee, too. There will be a coffee bar where the baristas show you all different kinds of coffee drinks and give out free samples.

The highlights of the festival are probably the tastings. You can choose from a long list of different topics and companies. And it is really a bargain. Every tasting costs 30 SEK which is a fantastic price if you compare it to regular tastings. But plan your day carefully. There are only limited tickets to the tastings and they are all on a first come, first served basis.
There is even a crazy competition going on under the three festival days. You can win your weight in chocolate!! Even if you donât win, you will at least get a little surprise.

What kind of companies can you find there?
At the festival there will be all kind of chocolate producers and suppliers. But not only that, the festival is officially called Gothenburgâs Chocolate and Delicacy Festival, so you will some other delicious foods there.
From all the companies, there will even be a lot of Gothenburg-based companies presenting their products. Examples are La Praline, Kanold, Berzelii, Zebeda and some moreâ¦

How much does it cost?
A day ticket to the festival costs 130 SEK. You can buy tickets in advance for 100 SEK. Places where you can buy the tickets in advance are:
- City Museum
- Flickorna Kanold (Viktoriapassagen and inside Saluhallen)
- Cafe Kanold (at GrÃ¶nsakstorget)
- Oliv Olja Etc. (Haga Nygatan)
- Caffe Bar Mezzo (Kungsgatan 47)

Tickets are sold on advance until Thursday evening.
Tastings costs 30 SEK and can only be bought at the festival at the same day.

Link to the official homepage (Swedish only)