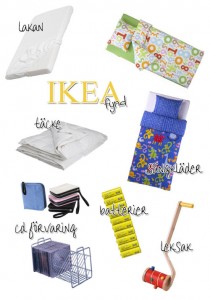 Everyone knows what IKEA is, but do you really know what it stands for? IKEA is acronym for Ingvar Kamprad Emtartyd Agunnaryd. Emtaryd is former name of a farm where Ingvar Kamprad (the founderÂ Â of IKEA) grew up in, Agunnaryd is the small village name where the farm was situated. IKEA now is global furnitureâs warehouse with present in 36 countries worldwide.

The story of IKEA really started with Ingvar Kamprad the young entrepreneur out from SmÃ¥land (a region to the east side of Gothenburg by the Baltic Sea). Already from a young age Ingvar Kamprad was business minded and known to be very spare some with his money. After a couple of earlier small businesses he started to work at NK (nordiska companies) in Stockholm where he saw the potential of selling unassembled furnitureâs to low prices and then let the buyers themselves do the work. By doing so itâs easier to transport the furnitureâs and cut costs. At first IKEA only sold by post orders with their traditional catalogues until 1958 when the first IKEA warehouse started in Ã lmhult (pretty close to Gothenburg) in 1958.The second warehouse started in Stockholm at Kungenskurva and when it started

it was probably one of the biggest warehouses the world has yet seen in 1965. The IKEA concept worked perfect for the main stream consumers, always delivering great value to customers to low prices. IKEA later on followed their success and went on to start expanding out to the rest of world during the 70s and in now present in 36 countries with its 294 warehouses. Turnover in the end of the fiscal year 08 was 21.2 billion Euros maintaining a growth in turnover in the past five years. Most of IKEA purchases are still made in Europe in general but China is also a very important manufacturing partner for IKEA providing 21% of all purchases.

IKEA is one of the Sweden biggest retailing successes of Sweden along with H&M. Whatâs really makes IKEA is also much caused to their employees, everyone at IKEA is feels such a great bond and is always very happy to help out.

IKEA is controlled today by Ingvar Kamprad in the Netherlands of his Holding parent company calledÂ INGKA who also owns many of the manufactures who makes the furnitureâs. The IKEA group is today still not a public company enlisted on any of the big stock markets and always holds a very low profile about their internal financial status.