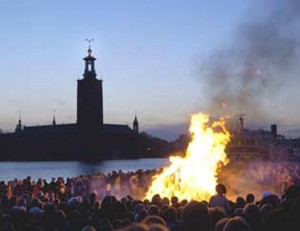 Hopefully you are all enjoying the nice and warm weather. Could it be, summer is really here? Well, on saturday it is ValborgsmÃ¤ssoafton (Walpurgis Night) and that marks the start of the summer half-year.

Does the attributes of celebration seem familiar? Well, like I wrote last week bonfires and fireworks are also traditions for Easter. At ValborgsmÃ¤ssoafton, which marks the end of the winter half-year, in the break point between winter and summer there has always been a belief that evil forces have been in motion. The May fires are lit to scare away witches and evil spirits.

Wherefrom the tradition with the May fires originally stems is not quite clear. It may have been brought here by German merchants but there are also theories that the May fire originally was of practical use. In the shift between April and May the cattles were let out on the rangeland and the fires were used to scare away predators. No matter how the tradition arose it is for sure an important attribute for the ValborgsmÃ¤ssoafton celebrations.

Today, the Swedish ValborgsmÃ¤ssoafton, is most celebrated in the cities around the big universities, first and foremost in Lund and Uppsala. In those cities the ValborgsmÃ¤ssoafton celebrations are very traditional and lots of students are participating. For us students, ValborgsmÃ¤ssoafton is a reminder of the approaching summer and freedom. We have only a few exams and lectures left and summer is really close. So join the celebrations and read this week's city beat for some tips on how to celebrate.