The scene is Melbourne, college student kitchen; we're sitting around the table chatting and laughing while one of my friends start cutting the cheesecake into equal pieces. As she takes the first piece of cake and transfer it to the plate, it falls 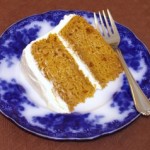 to the side with a loud splat.

"Oh no," I laugh as I point towards the fallen cake. "Now, you won't get married," I grin as I'm feeling proud that I was the first one to point it out.

My friends silence and stare at me like I've grown a second head and grown sprouts. "What?"

"You know, when the piece of cake falls to the side, it means that you wont get married?" I ask while my grin starts to fade away as I realise that they have no idea what I'm talking about.

"Is that some weird Swedish tradition or prediction or something?" One of my friends smirk at my bewilderment.

"Yeah, or something," I answer and together we laugh at the silly side cake = no marriage.

My friends took on the superstition like ducks in the water. Whenever we had cake at different parties and the piece of cake fell to the side, they cheerfully laughed at the person receiving the plate and announcing that they would never get married. One of my friends made it her mission to get the piece of cake to stand up again after it fell. Sometimes, it would take several tries before she got it to stand up right again. She would then announce that thanks to her, the person who's plate and piece of cake it was, would only have to suffer the possibility of having a divorce, but that she had saved he or her's marriage.

After meeting several International people over the years, I've tried to sneak in the superstition whenever I can just to see if they recognise it. But there's been very few who has. So the conclusion is that the superstition must have its origin in Sweden.

After some research, a possible answer has been found. The superstition's has it's origin in the perception during the 1800, of what qualities a woman should have in order to get married. If a woman could handle in transferring the piece of cake from the whole cake onto a plate, it would mean a good quality for her to have in the eyes of a potential husband.

While it might not be a thing to be concerned about in modern society, it is a silly and fun superstition that lives on in the Swedish culture.