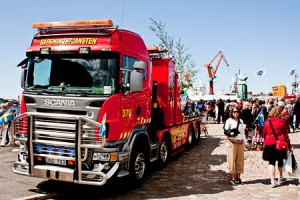 Youths loudly singing on the backs of open-sided lorries ought to belong to the more unusual sights, and for most of the year it does. But through the end of May and up until maybe the middle of June every year, it is actually not that uncommon. This is due to what is known as 'studenten' in Sweden, the graduation from upper-secondary school(1) when a person goes from being an upper-secondary school student to becoming eligible to enter University.

Up until 1968, graduation from upper-secondary school in Sweden included taking a final graduation exam which would make student eligible to apply for continued studies at an institution for higher learning. It was customary for those who passed the exam to go out partying afterwards. However, the final graduation exam was removed in 1968 in favour of 'avgÃ¥ngsbetyg', a paper which contains the grades received in all courses taken at upper-secondary school. Based upon the grades in several key courses such as Swedish, Mathematics, English and so on, an overall score is calculated. It is this score that is often used when applying for studies at institutions of higher education, and when there are more applicants than there is room for in a course, the applicants with the higher scores are accepted. This graduation certificate is thus certainly very important, and although the partying between 1968 and end of the 1980's was not as heavy as it was before, it intensified once more during the 1990's and is now once more an important part the graduation from upper-secondary school.

'Studenten' (graduation from upper-secondary school) commonly begins with a champagne breakfast before school begins. At school, although maybe the specifics may vary from school to school, the students receive their graduation certificates form their head teacher or the principle. Afterwards, and often after having said goodbye to the teachers, it is time for 'utspringet', a tradition with its roots in the final graduation examination of old. When the exam finished, the doors leading out of the school would open and the students would come running out of the building and into the open school yard where parents would be waiting for them. Although there is no longer an exam to keep the students inside the school until a certain time, the tradition to run out of the school building to waiting parents, family and friends has persisted over the years and is now a deeply rooted tradition.

Other traditions include the placards carried by the parents waiting in the school courtyard for the students to come running out of the building. The placard will have the name and a picture of the student when she/he was much younger, oftentimes a baby or toddler. It is customary to bring flowers to the graduates at the 'utspringet'.

After 'utspringet', it is customary to tour the city and show to the world that you have graduated. Often, this is done on the backs of open-sided lorries, often decorated with balloons and branches from birch trees. This tour is many times followed by a reception at home, when friends and family enjoy some time together. It is not uncommon for the student to attend several such receptions ânot only her/his own, but also that of many friends who also graduated on the same day. A student party for the newly graduated typically ends the day.

It is tradition to send 'thank you' cards to everyone who showed up to celebrate on the day of graduation. The 'thank you' card typically includes a picture of the student taken on the graduation day. It is also customary to attend a graduation ball. At these balls, all students who graduated from a certain school are invited. In larger cities, such as Gothenburg and Stockholm, where there are many upper-secondary schools, business for party organisers should be quite good and finding venues for the graduation ball could be difficult unless organised well in advance. Here in Gothenburg, as a result, you will see often see you Swedes in tails, tuxedoes, suits and the most elaborate and gorgeous looking dresses imaginable during late May and throughout June. 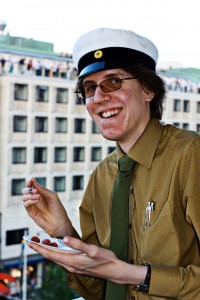 Of course, another tradition worth mentioning is the 'studentmÃ¶ssa', the white cap worn by the graduates on the graduation day. The 'studentmÃ¶ssa' is also worn every year on Valborg by people who have graduated from upper-secondary school. Although most people who graduate get one of these caps, it is actually not provided free of charge. Indeed, the cap can be quite expensive, often costing in the range of 500 SEK. Often, but not always, a coloured ribbon on the base of the cap denotes the principle field of study the student pursued at upper-secondary school, for instance social sciences or natural sciences, or something else. On graduation day, it is customary for class mates and friends from other graduating classes at the school to sign the insides of the caps, as well as write some words of remembrance or a good luck wish for the future.


The songs of graduation

Traditionally, 'studentsÃ¥ngen' ('student song' or 'graduation song') is sung by the students graduating from upper-secondary school. Prince Gustaf (Frans Gustaf Oscar, 1827-1852), also known as 'sÃ¥ngarprinsen' (the singer prince) wrote the music and asked an acquaintance of his, Herman SÃ¤therberg, to write the lyrics. The result was 'studentsÃ¥ngen', which was composed for male choir and was first performed at a spring concert in 1852. Apart from being sung on the graduation day, student choirs perform it every year at Valborg. Among the notable recordings of the song is the 1938 recording by Swedish tenor Jussi BjÃ¶rling, still considered to have been one of the worlds greatest operatic tenors ever.

Lyrics (my translation, so please take it for what it is):
Sjungom studentens lyckliga dag
(Let us) Sing about the happy day of graduation
lÃ¥tom oss frÃ¶jdas i ungdomens vÃ¥r!
let us delight in the spring of youth!
Ã n klappar hjÃ¤rtat med friska slag
The heart yet beats with steady beats
och den ljusnande framtid Ã¤r vÃ¥r.
and the brightening future is ours.
Inga stormar Ã¤n i vÃ¥ra sinnen bo
No storms yet harbour in our minds
hoppet Ã¤r vÃ¥r vÃ¤n, och vi dess lÃ¶ften tro,
hope is our friend, we believe in its promises,
nÃ¤r vi knyta fÃ¶rbund i den lund
when we (form a union?) in the grove
dÃ¤r de hÃ¤rliga lagrarna gro,
where the wonderful laurels grow
dÃ¤r de hÃ¤rliga lagrarna gro,
where the wonderful laurels grow
Hurra!
Hurrah!

Today it is not uncommon to hear another graduation 'song' as well. In fact, this one is much more common today, than is the 'studentsÃ¥ngen'. The music is apparently adopted from the French song 'Marlbrough s'en va-t-en guerre', and the Swedish lyrics are perhaps rather simple:

2) HÃ¶gskola â much like a University, but without the right to carry out research.