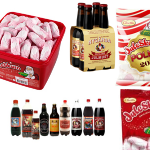 Christmas is drawing nearer and some season products have entered supermarkets. This is the time where Julmust and Juleskum among others take stage and gets the attention of the Swedish people.
During the month of December, 45 litres of Julmust are being sold all around the country and Coca-Cola drops 50% procent. It is a tradition that keeps coming back to the Swedish people and the Julbord every year.
Every year, 194 millions Juleskumâs Santas are made, which means a total of 1200 tons of Juleskum. Juleskum is yet another tradition for many Swedish natives that have grown up with the sweet treat.
The softdrink Julmust was created 1910 by Harry Roberts from Germany. From the beginning the drink was considered a alcoholfree beer but was then changed to be considered a sweet softdrink. The drinks have become most popular during the years and up to 30 different brands can today be found in the stores.
The Juleskum was created 1934 but didnât start become popular until the 1960âs and it started to look like the special Santa shape it is today.

To find which julmust and juleskum one like, it's important to go out and try them on until one find the favourites. There's worse fates then doing just that right?