The belief of pÃ¥skkÃ¤rringarna stems from the belief in witches in the 17th century. During this time thousands of people around Europe were suspected to be in cooperation with the Devil and therefore executed. But are pÃ¥skkÃ¤rringarna really witches? Well, some attributes are similar. For example, pÃ¥skkÃ¤rringarna are traditionally equipped with brooms, coffeepots and black cats, which is similar to the witchesâ equipment. However, people did not drink coffee in Sweden in the 17th century, but according to more modern superstition the coffeepot might symbolise a kettle and the black cat is a symbol of misfortune. So, there are some similarities, even thought pÃ¥skkÃ¤rringarna are quite a lot more friendly than the withes were.

Today, it is common for both boys and girls to dress up as pÃ¥skkÃ¤rringar at Easter. The traditional pÃ¥skkÃ¤rring-outfit consists of a dress, an apron and a headscarf. The boys sometimes dress up as Easter men, with menâs clothes, hat and moustache. Then the kids go as a group to the houses in the neighbourhood, ring the doorbell and wishes people a happy Easter. Sometimes they give away hand-drawn Easter cards or Daffodils and in return they get candy or some coins. The gifts are collected in the coffeepots and when the kids get home, the treasure is divided equally between the participating kids. This tradition is quite similar to the American âtrick or treatâ-tradition at Halloween, except for the trick part of the tradition. PÃ¥skkÃ¤rringarna are always nice, a bit greedy maybe, but still friendly. PÃ¥skkÃ¤rringarna most often show up at your door on the SkÃ¤rtorsdag or on Easter Eve, so donât be afraid if you see one.

One old Easter tradition is the Easter fire that is lit on Easter Eve. The tradition was brought to Sweden in the middle of the 18th century via Dutch merchants to Gothenburg. Back in the days, the bonfires were lit to scare the Easter witches away. Nowadays, some people use fireworks instead of a bonfire. I guess it is working, since there are no Easter witches to be seen anywhere.

In the archipelago of Gothenburg there is a competition between some of the islands about who can make the biggest bonfire. People keep their Christmas trees just to be able to put it on the fire and they are very attractive loots. Stolen firewood has caused fights between youths from the different islands.

The Easter Bunny is the Eastersâ counterpart for Santa Claus. In many Swedish families it is popular to arrange games were Easter eggs, filled with sweets, are hidden in the garden or in the house and the kids get to search for them. They are told that the eggs are hidden by the Easter Bunny. 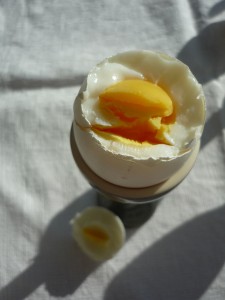 The egg, the chicken and the hen

What have they all got to do with Easter? They are everywhere. On decorations, cards, handcrafts etcetera. Hens and chickens are connected with the eggs, which are traditional Swedish Easter food. The hen had a stop in the egg production during winter to start producing eggs again short before Easter. Due to the fast, no eggs were eaten on the week before Easter and therefore people had plenty of eggs for Easter.