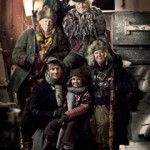 Since 1960 the channel SVT has been making Advent Calendars that start from the 1st of December and ends on the 24th of December. Every year, a new calendar with a new story airs.

This year, the story Tjuvarnas Jul (The Thievesâ Christmas) is about a league of thieves that goes by the name of Klappsnappare. The story takes place in Stockholm during the 1800. Christmas is the most successful for the league because of all the Christmas presents that are waiting to be stolen.
One of the thieves is taken by surprise when a small girl shows up on his door step with a note claiming to be his unknown daughter. After she saves the league from getting caught by the police, they decide to teach her how to be a real thief.

Donât forget to start watching SVT on the 1st of December to see how the story of the Klappsnappare will unfold.