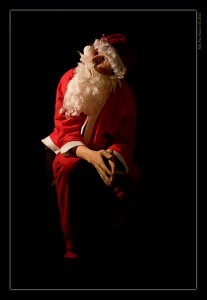 Tomorrow, I'm going to play Santa Clause at a local preschool. The guy who was originally going to be Santa could not make it, so a friend of mine who works at there asked me if I would be interested to do it instead. I am looking forward to it. The whole thing will only take about thirty minutes, and all I will really do, will be to say 'ho-ho-ho' and then hand out the presents to the children. Still, it reminds me of the many Christmases that I have experienced and are now part of my past.

As a young boy on Christmas eve, I would oftentimes be the first person to rise in the morning. This is quite unusual for me, who tend to find the morning a sort of devilish time of the day when all the earthly forces are joined under a common banner in a merciless attack on the unearthly dreams that for a few hours during the night have kept me captivated. But I guess there is something unearthly about the beauty of a fully decorated Christmas tree, and on Christmas Eve, that unearthly beauty combined with the mystery represented by the Christmas presents placed under the tree tends to be even more alluring than dreams. And so, I would, on Christmas Eve, be the first one to get out of bed in the morning.

Up until around 2pm, we are usually very busy. Mother is taking care of all the traditional dishes: Julskinka (Christmas ham), sometimes julep (Christmas eel) and all of that. When younger, I would spend that time running around waiting for all the guests to arrive, and maybe I sometimes I would bring some plates or glasses from the kitchen to place on the dining table. Large, though, I would just be in the way.

At 2pm, the guests would begin to arrive. We celebrate Christmas with family, as is tradition in Sweden. If you do not have a family to celebrate with, Christmas can be a very melancholy time in Sweden, which is probably why you will find that not everyone likes to talk about Christmas. I am fortunate enough to have a family with whom to celebrate, and we always begin the partying at 2pm, so that all the guests will have arrived by the time we sit down in front of the TV to watch Kalle Ankas jul (Donal Duck's Christmas). During Kalle Anka, we enjoy a light starter and talk and laugh a lot. Everyone has seen Kalle Ankas jul before, and everyone knows exactly what will happen, and when it will happen, so keeping more than a casual eye on the TV is not necessary.

Afterwards, it is time for dinner. While mother makes some last minute preparations in the kitchen, my grandmother will usually sit down by the Christmas tree and inspect the presents, trying to guess what may be hidden inside. Of course, both my brother and I love this tradition, and happily join in overtime. Sometimes our guesses prove to be spot on, but more often we are miles off. The important thing is that it keeps us happy and occupied until dinner, and mother can work without interference. Then we eat, and eat, and eat, and then we eat some more.

The last part of the day has us once again seated in the living room, where the Christmas tree is. Dessert is served, and I usually sneak out to change into a Santa Clause costume. Yes, it is I who play Santa Clause in our family. Usually, it is the father in the family to whom this roll falls, but in my family, I play Santa Clause. It is great fun, and I have done it since I was very little. Once, I even tried to sing, but I shall not attempt that again. Why, I almost swallowed the fake beard!

Once all the presents have been handed out and opened, it is usually quite late and the party has come to a natural end. Maybe a truly traditional Christmas Eve should include some traditional Christmas games as well, like dancing around the Christmas tree. But in our flat, there is simply not enough room for that. I suppose this means that everyone's Christmas Eve is not the same, but I do not think our way of celebrating Christmas is unique either. It is probably a pretty common way to celebrate in Sweden.