The Native: A Traditional Lucia 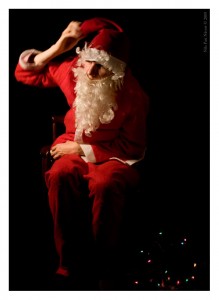 I remember waking up very early a few years ago. It was a very cold winter day in December â in fact, it was the 13th of December, and that was also the reason for why I went up so early. the 13th of December is known as Lucia in Sweden, and it is the day when we celebrate Italian saint Lucia who, according to tradition, spreads light in the dark winter night. So, I was up around 5 o'clock in the morning, which is supremely early for me, just so that I could celebrate a traditional Swedish Lucia.

So how is a traditional Swedish Lucia celebration? If you are in school, and by that I mean primary or secondary school, you will probably assemble in the main auditorium the first thing you do in the morning. If the school does not have an auditorium, everyone will gather in their respective classrooms instead. Then the waiting begins.

I have attended both large and small schools, schools with auditoriums and schools without. In lower primary school, we did not have an auditorium. I remember the teacher trying to begin the lesson while we waited, but very little was done. The waiting was sometimes infuriating. Especially when you could hear singing in the distance, and knew what was going on in one of the other classrooms further down the corridor. But then the waiting was finally over. The singing would grow louder, our teacher would turn off or, if possible, dim the lights and then the procession would appear.

Dressed in white, with burning candles worn in a crown on her head, Lucia would appear in the doorway, followed first by her 'tÃ¤rnor' (maids), and then her 'stjÃ¤rngossar' (star boys). The Lucia procession, consisting of the school choir, would fan out in front of chalk board, and then a short Lucia concert would ensue. At the end, Lucia would once again begin singing the traditional Lucia song â the same song they sang when they entered â while she slowly made her way back out into the corridor and towards the next classroom.

Then the lights would be turned back on again, and we would eat lussekatter, a traditional kind of sweet bun with raisins and saffron (the recipe was posted here on Misi.se yesterday, and may be found here). These are delicious, but a word of caution: there are lussekatter without saffron, and there are lussekatter with very little saffron. These may be cheaper, but they certainly do not taste as well!

But what if you are attending primary or secondary school in Sweden? Well, I was a University student that time a few years ago when I got up so very early in the morning. I knew that you could see Sweden's Lucia, who is traditionally crowned a few days before the 13th, if memory serves me right, on television, but I wanted a live performance. And there are live performances at many places in Gothenburg. Gothenburg University usually has one and many churches has Lucia concerts as well. As for lussekatterâ¦ well, most cafÃ©s in Gothenburg have been selling those for weeks already!

The 'traditional Lucia song' as actually an Italian song called Santa Lucia. The Italian original makes no mention, as far as I can tell, of a bringer of light in to an earth abandoned by the sun. The Italian original is also much quicker than the Swedish version, which often becomes excessively slow as it has the beat has to match to movement of the Lucia procession. The problem is, though, that with live candles in your hair and hands, it is very difficult to walk fast...

I hope you'll all enjoy a lovely, traditional Swedish Lucia on tuesday!