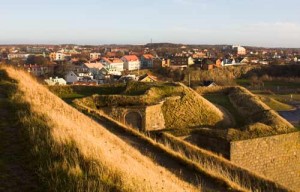 Although a thriving tourist city during the summer season, famous for its many veteran cars and great opportunities for windsurfing, the city of Varberg appears almost to hibernate during the dark, colder months. But while the colder autumn weather will prevent all but the boldest of windsurfers, and although the number of veteran cars in the streets is greatly reduced, there is one great reason for visiting Varberg even outside the main tourist season. That reason is called âthe Bocksten manâ, and is more than 500 years old.

It was in 1936 that Thure Johansson, then eleven years old, discovered what looked like a piece of cloth with blackened bones caught in it whilst working the harrow on Bockstenâs moss. Having shown his find to his father, the two of them returned to the moss together, where it was determined that the bones discovered were human. The parish constable was sent for the following morning.

Although the man in Bockstenâs moss had definitely been murdered (he had three poles of wood run through his body) there was no need for a murder investigation. At least, not a traditional one. Scientists have since been able to determine that the man found in Bockstenâs moss probably died sometime between 1350 and 1370, more than 500 years ago. But who was he, who murdered him and why? These are questions that we may never know the answer to, but will no doubt keep researchers and visitors to the museum busy for ages to come.

The Bocksten man is also well known for well preserved clothes he wore. At the museum it is possible to see a life-size wax copy of the mysterious man as he is believed to have looked, dressed in replicas of his clothes. It is also possible to buy the sewing patterns for his clothes, which come complete with commentary on some of the assumptions and guesses the scientists have had to make when recreating those pieces of clothing that were damaged. If anyone should happen to complete this set of medieval clothing, please teach me how you did it, as I do not even know where to start!

The Bocksten manÂ can be seenÂ atÂ Varberg's museumÂ in Varberg's Fortress. The fortress,Â for that matter,Â is indeed a remarkable sight in its own right.Â Dating back to the 13th century, then only a lone tower standing on top of a hill overlooking the town, Varbergâs fortress grew to become a formidable fortress towards the end of the 16th century. Today, the fortress remains a majestic presence on that same hilltop, overlooking the modern city of Varberg. While it may no longer serve as protection for the city, it is a historic place and I cannot help but wonder at all it has seen during its long years of service, through medieval times and all the way into the 21st century.