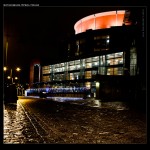 
A MUSIC THEME SPECIAL
For our two week music theme, there are two artists that simply must be mentioned: Jussi BjÃ¶rling and Birgit Nilsson. If you have not heard of them before, I am not surprised. Both of them were Swedish opera singers, and opera singers are not mentioned as often in media as singer in other genres. Nonetheless, both singers had tremendous international careers and reached the absolute top within their respective fields (both were opera singers, of course, but BjÃ¶rling a lyric tenor and Nilsson a dramatic soprano and celebrated Wagner interpreter). BjÃ¶rling is, in fact, continually counted as one of the greatest tenors in recorded history, together with italian tenors Beniamino Gigli and Enrico Caruso, the latter of whose early recordings helped establish the music recording industry.

Jussi BjÃ¶rling's (1911-1960) father, a talented singer himself, taught his three sons to sing from a very early age. Indeed, Jussi was only 4 when he performed in public for the first time with his brothers and their father's other pupils. Following this performance, the 'Bjoerling Male Quartet' began touring the country, and in 1919 went on a 18 month tour to the USA. So, it is safe to say that Jussi started singing at a very young age. He debuted in his first major roll as an opera singer at the Stockholm Opera House in 1930, setting out on a career that would make him famous around the world. He continued to sing up until his early death caused by a failing heart in 1960.

Among opera fans, BjÃ¶rling is well-known for his impeccable singing technique and beautiful voice. His repertory included not only opera, but also other classical songs and Swedish folk songs. He became one of the foremost interpreters of Jean Sibelius's songs, but to the average Swede he is perhaps most well-known today for his recording of O Holy Night, which is still included on many Christmas collection CDs being sold and released around Christmas every year. Seeing how Christmas is quickly approaching, I will include a link to his recording of O Holy Night on YouTube. Â The second YouTube link is a video performance of Till Havs (To the Sea), a Swedish song which he often included in his recitals and concerts, and which is generally considered to be one of his hallmark pieces.


Did you know...:
There were talks of making the Swedish song 'Sverige' (Sweden) the new Swedish national anthem following a recording Jussi BjÃ¶rling made of the song. It never happened, but it is indicative of BjÃ¶rling's phenomenal voice and standing among the Swedish populace at the time.

Birgit Nilsson (1918-2005) recorded Giacomo Puccini's opera Turandot together with Jussi BjÃ¶rling, but otherwise there are few points in time where their careers intersect, despite both being Swedish opera singers. Nilsson proved superb as princess Turandot, but it was her Wagner performances that made her really famous all over the world. BjÃ¶rling, however, was not a Wagnarian tenor, and although he occasionally did sing Calaf's part in Turandot, it was not a role best suited to his lyric tenor. If you ever happen to compare and contrast BjÃ¶rling's performance as Calaf with that of italian spinto (spinto = a tenor combining dramatic and lyric singing) Franco Corelli you will hear that although BjÃ¶rling's technique did allow him to take on the more dramatic part of prince Calaf, the music is better suited to the dramatic voice of a true spinto.

So, while Nilsson and BjÃ¶rling did not meet often on the opera stage, both of them reached the absolute top within there respective fields. BjÃ¶rling was, and is still, considered one of the greatest tenors in recorded history, together with Beniamino Gigli, Enrico Caruso, and personally I would also include Luciano Pavarotti on that list as well. Birgit Nilsson, with her large, dramatic voice, is remembered as one of the greatest Wagnerian sopranos in recorded history, together with Kirsten Flagstad, and her recordings of princess Turandot rank amongst the absolute best. That is why I thought it fitting to include a link to a video performance on YouTube where Nilsson performs the famous aria In Questa Reggia from Giacomo Puccini's Turandot. In this video you also see the great Franco Corelli as prince Calaf.


Did you know...:
Nilsson was once asked to record an aria using very old recording equipment as part of a 'test' to see how opera critics would react to and judge a modern recording made with dated technology. The critics were told it was a recently discovered, very old recording, and their judgement of the singer was harsh. They became quite upset and very angry upon being told that the performer was none other than the great Birgit Nilsson. I find this interesting, as both Nilsson's and BjÃ¶rling's recordings are starting to show their age â who knows what these two greats truly sounded like live...

Next week we'll have a look at another Swedish phenomenon on the world music stage: ABBA!