A Glance at Swedish Literature, Film, and One Computer Game 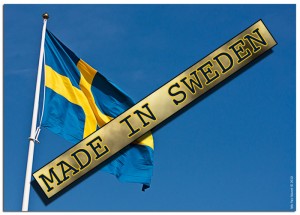 On the subject of 'Made in Sweden', the time has come to turn an eye to the Swedish entertainment industry, including literature, films and computer games. The music industry should perhaps, logically, be included, but since we are going to have a special music theme sometime in mid-November, I figured I should leave Abba and Jussi BjÃ¶rling for then.

Literature:
When studying Swedish literature, there are some names that simply must be mentioned. Selma LagerlÃ¶f (1858-1940) is perhaps most well-known for the children's book Nils Holgerssons Underbara Resa genom Sverige (The Wonderful Adventures of Nils) in which a boy named Nils travels through Sweden on the back of a goose. She was also awarded the Nobel Prize in literature in 1909. It may also be interesting to note that Selma LagerlÃ¶f is currently featured on the 20 SEK banknote, together with Nils Holgersson on the back of the banknote, riding a goose over SkÃ¥ne, southern Sweden.

August Strindberg (1849-1912) is another author and playwright that cannot be left out. With Red Room, he wrote what is today considered the first truly modern Swedish novel. The Strindberg museum writes that 'Strindberg introduced a modern prose style and is considered one of the great renewers of the Swedish language' (The Strindberg Museum). If you are looking for an easy read in Swedish, I could not in good conscience recommend the works of Strindberg, however, as he has a very rich, descriptive style with sentences often running longer than the equator and the river Nile together. At least, that has been my experience with him.

I would, on the other hand, recommend Astrid Lindgren (1907-2002) as a fantastic Swedish author who has written several books that I think would not be too difficult for Swedish beginners. Although she wrote books for children, many of them are quite enjoyable reads for adults as well. As the world's 25th most translated author, finding her books in English or, perhaps, your own native tongue, should not prove too difficult a task either, should you not wish to try out your Swedish reading skills. Some of her most famous works include that of Karlsson pÃ¥ Taket (Karlsson-on-the-Roof), Barnen i Bullerbyn (The Six Bullerby Children) and Pippi LÃ¥ngstrump (Pippi Longstockings), a character she invented for her daughter Karin when she was unwell and bedridden.

A now living Swedish author who has made a name for himself internationally as well as nationally, is Jan Guillou (1944-). With Coq Rouge, Guillou introduced the fictional Swedish military spy Carl Hamilton for the first time in what was to become the first in a series of books featuring Hamilton. He is also the author of the Crusades trilogy featuring VÃ¤gen till Jerusalem (The Road to Jerusalem), Tempelriddaren (The Knight Templar) and Riket vid VÃ¤gens Slut (The Kingdom at the End of the Road). As several of his books have been made into films, this is a good point to move on to the Swedish film industry.

Films:
Arn Tempelriddaren (Arn the Templar Knight), based on Jan Guillou's Crusades trilogy, was released in 2007. Produced jointly by Sweden, Norway, Denmark, FInland and Germany, the productionhad a budget of 210 million SEK, making it the most expensive production in Swedish cinema. The result were two movies, mostly shot in Sweden, that has been released internationally and is available in English as well as Swedish.

Although many films deserves to be mentioned, I shall limit myself to Lasse Ãberg's (1940-) SÃ¤llskapsresan 1 and leave it at that, lest I spend the rest of the day and some 100 pages on the subject. SÃ¤llskapsresan 1 (The Package Tour) is a Swedish comedy about a charter trip to the Canary Islands. Stig-Helmer Olsson, the main character, is played by Lasse Ãberg, who also directed and co-authored the film. The film is very popular in Sweden even today, 30 years after its release. The film is also available in English, as far as I can tell, although maybe only on Blue-Ray.

Computer games:
I recently became aware of a rather odd, but curiously interesting computer game called Minecraft. Although the game has not yet been completed, it has already sold more than 415.000 copies and apparently has over 1.3. million registered users. This is quite staggering for a game that has not yet been released, and is not developed by an established game development firm. Indeed, Markus Persson had, as far as I can make out, just left his job as a game developer when he started work on Minecraft.

Minecraft is a very difficult game to describe. You play a first person character is a completely destructible world, meaning that pretty much anything (probably everything) you see can be destroyed. Yet it is not a game about destruction. Mining for coal, iron, gold and so on, or cutting trees for wood, or killing animals for food â it is all different forms of destruction. But then you have the creation aspects as well. The raw materials is used to build things, and the food is used to makeâ¦ well, warm food, which is better to eat than raw food. In the game the food acts as health potions, should you hurt yourself from falling down a mine shaft or similar, or should you happen upon some of the less than friendly creatures of the night and dark. These creatures include hostile spiders, skeleton archers, zombies and so on. While safe during the day, they do come out when the sun sets, or wait for you in caverns far below the ground, where the sunlight never reaches. But because it is so difficult to describe this game and do it justice, I will include a link to a video on YouTube that, I hope, will give you an idea about what the game is all about.