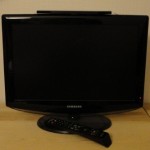 As we have a food theme this week on misi.se, it is time to present some food shows on Swedish TV. As in many other countries cooking is always an important issue and people need some inspiration. In Sweden, you can even watch some famous shows of American and British chefs like those of Jamie Oliver and Gordon Ramsey. There are, of course, also Swedish shows which give you inspiration to new recipes.

A very outstanding show is âVad blir det fÃ¶r matâ (What will it be for dinner), hosted by Per Morberg. First you have to learn that chef Per Morberg is known for making non-traditional food with new and exceptional combinations. His style is described as spontaneous, fast, passionate, adventurous and delicious, on TV4âs website. Special about the show is that it is not a conventional cooking show. There is not a chef that tells you how to cook which ingredients. Rather, Per Morberg invites his friends or other famous persons to cook together at his place. Often, his children help out and everything is somehow choatic. That is why this show has some spontaneous and personal charm. By the way, the food that finally make together is very delicious.

SVT had an interesting show about food last year. It is called âLandet BrunsÃ¥sâ (Country of brown sauce) and the title refers to the Swedish preference of eating brown sauce. You might know this sauce from eating it with Meat Balls. Landet BrunsÃ¥s presented, discovered and explained some of the eating habits in Sweden. You get an insight into why traditional Swedish food culture is the way it is and how and why some food trends developed. Have you also realised that home-made food has become more and more appreciated? Why that is so is also discussed in the programme (and it is has to do with lack of timeâ¦).

The home-made food trend is subject to another show, âHalv Ã¥tta hos migâ (Half past seven at my place). This show is the Swedish version of âCome and Dine with Meâ. The idea is simple. There are four persons who have never met before but will have dinner parties together. The host will cook and arrange the dinner party for the other three. They give feedback on the party and comment hard on everything. It is, of course, a competition and the one who did best wins a lot of money. Special about this show is that it is common people who are on the show and share their recipes.

In Sweden, there are even a lot of so-called âkÃ¤ndisarâ (people who are famous, mostly working in the entertainment industry) who have their own cook books. Often, they also present their books on TV and get an own show.

Have you found your favourite food show in Sweden? And what is it like in your home country? Are there different kinds of shows?