The Kalle Anka series (Donald Duck) is an old Swedish traditionÂ to watch during Christmas Eve. The first series started to air in the beginning of 1960 and is still the most watched show during Christmas in Sweden.

There are no clear reasons for why Kalle Anka became such a popular Christmas Eve tradition for Swedes. It might have been caused by the initial showings of the Walt Disney series that became so popular that each year the whole family joined to watch the great series. As time goes and this is repeated year after year a new national traditional arises. 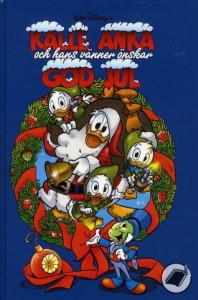 Currently the Kalle Anka series lasts for around one hour and consists of several extracts from various old traditional Disney favorites.Â  For example the program contains scenes from Robin Hood, Bambi, Snow white, the seven dwarfs and the most traditional series is the Santaâs Workshop along with Duck Universe. Nowadays except for the traditional series they usually include a couple of extracts from more modern Disney pictures.

The series airs at each Christmas Eve at 15:00 on Svt 1, this one hour series is often ranked as the highest TV-rating show in Sweden every year, and it draws approximately 3, 5 million viewers each year.

For us itâs a tradition to take a break between the meals at Christmas Eve, watch Kalle Anka with the family while sharing an Aladdin chocolate package ;). Thatâs the true Swedish Christmas holiday way!

Therefore if want to celebrate Christmas the Swedish way, tune in on Kalle Anka at 15.00 on Svt 1 on Christmas Eve!