A Short History of Gothenburg


The city of Gothenburg has a history that goes all the way back to the 10th siÃ¨cle. 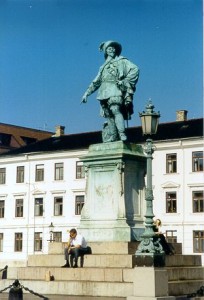 The modern version was founded in 1621 by orders from the king Gustav II Adolf who got tired of the Danes plundering the area and decided to build a well defended city. The habitants from the smaller villages around the new city were ordered by the king to move into the new city. It was soon discovered that the new city was built on marshland and Dutch constructors with experience of building in marshland where hired together with Scotsmen, Englishmen and Germans.
The template that was used for building Amsterdam where also used to construct Gothenburg. The city was equipped with one of the strongest defense systems in Europe at that time with fortresses like âElfsborgs fÃ¤stningâ, âSkansen Kronanâ and âSkansen WestgÃ¶ta Lejonâ guarding the river. The city grew to be the important trading center Gustav II Adolf intended it to be and the economy flourished. In 1731 the âEast Indian trade companyâ was founded in Gothenburg making the city the center of Europe for trading with China and the Far East. Products like silk, furniture and ceramics came to Europe with the ships of the âEast Indian Trade Companyâ and created great wealth in Gothenburg. There are still remains from this great success. If you stand in Brunnsparken and look around, maybe you will see a sign on one of the buildings?