A GENERAL ELECTION THEME SPECIAL
Four years ago, several of the major right-wing parties joined together to form a coalition government, gaining enough votes to force the social democrats into opposition for the first time in many years. Since general elections are held one every four years in Sweden, this year may mark yet another change in Swedish politics. Will the current government remain in power, or will they not? On Sunday, we shall see.[caption id="attachment_3209" align="alignright" width="212" caption="Election advert used by the social democrats in their campaign."] 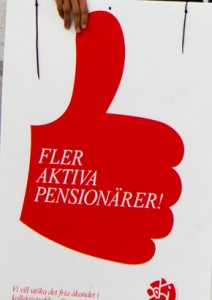 Although a kingdom, the Swedish king does not have any real political power anymore. Instead, we have parliament. Unlike the US and the UK, there are many different parties competing for power in Sweden. Normally you divide them into left wing parties, and right wing parties, although ideologically these Swedish definitions do not match their US counterparts. All parties have their own agendas and compete for power over Sweden. Here is a list of the major parties in Sweden:

Wild card:
MiljÃ¶partiet â as I understand it, this party sometimes cooperates with the right wing, and sometimes with the left wing.

In order to win in the last general election, the right wing parties Moderaterna, Folkpartiet, Centern and Kristdemokraterna joined forces, thus managing to use their combined votes to win the election. From a semantic viewpoint, it is interesting to note that MiljÃ¶partiet is the âwild cardâ and not Centern. MiljÃ¶partiet is Swedish for the Environment Party, whereas Centern is Swedish for the Centre, which suggests a centre position between the two blocks (left and right). Nonetheless MiljÃ¶partiet currently holds the centre position, and I guess neither party is interested in a name swap.