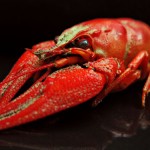 Mai, who wrote weekly articles for us during her exchange year in Gothenburg last year, ended one of her later articles by writing how she wished that she would have the opportunity to attend a traditional Swedish crayfish party before leaving at the end of July. I do not know if she did see her wish come true, but I do agree with her that crayfish parties are a great Swedish end-of-summer tradition that you should not miss if given the opportunity to attend. Unfortunately, it is, as previously mentioned, an 'end-of-summer- tradition, which could make it difficult for those of you who are leaving early to experience. That is why we decided to republish this article already in May, to give everyone the chance to read abut this tradition and maybe make arrangements to experience an 'early' crayfish party before heading back.

On the choice of Crayfish
A crayfish party is called âkrÃ¤ftskivaâ in Swedish, and of course it involves eating crayfish. During the crayfish-party season, Swedish news papers and evening papers will put together lists with the best to worst crayfish brands every year to help the consumers in their endeavours to find the very best out there (not to mention to boost sales of the papers). But to keep things simple, there are basically to varieties of crayfish, although I expect experts would disagree with me on that. There are the crayfish that live in lakes, and there are the ones that live in the sea. Opinions on which type is the best differs, although personally I would only take the lake dwellers over the sea dwellers if there were no sea crayfish left. The latter ones are simply that much better! (I say boldly, expecting lots of critical comments...).

Now, there are different solutions to this unfortunate âcatching fireâ problem, like going electrical, but the bottom line is that the paper lanterns are essential to a good cray fish party. Consider my family's solution to the âcatching fireâ problem, and how it effectually ruined the whole thing: In the beginning, there was fire. Burnt lanterns and lines forced a resolution. But instead of going electrical or hiring a fireman, we simply stopped lighting the lanterns, and soon we stopped putting them up, and now we have even stopped having crayfish parties altogether!