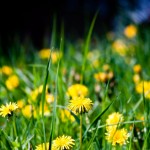 Midsummer does not only refer to the time around the summer solstice but also to the celebrations of the actual solstice. In Sweden Midsummer is one of the most important and most celebrated holidays.

The Midsummer celebration in Sweden is divided into Midsummerâs Eve and Midsummerâs Day (Midsommarafton and Midsommardagen). Although the date of the actual solstice varies, it was decided in 1953 that the celebrations should take place on the Friday and Saturday between June 19th and June 26th. Friday is the day of the main celebration which consists of raising the maypole and dancing around it.

Although the look of the maypole may differ, most common is the somewhat phallic design showing a cross with two rings. Usually the entire pole is covered with fresh greens and flowers and many people wear crowns of wildflowers on their heads. The dances around the maypole often include movements and gestures which reflect the content of the songs, for example when singing the song âSmÃ¥ grodornaâ (The little frogs) especially young children jump like frogs around the maypole.

Although interpretations claiming that the maypole is a phallic fertility symbol meaning to impregnate the earth could not be historically proven, Midsummer can be linked to an ancient fertility festival. This might explain one of the customs in connection to Midsummer which says that young girls are supposed to pick seven different flowers, jump over seven fences and put the flowers under their pillow. Then at night they will dream of their future husband. 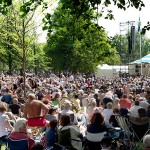 Eating (and drinking) together is an important part of the Midsummer celebrations. The typical menu on Midsummer is first potatoes often cooked with dill, sour cream, pickled herring, and strawberries for dessert. The menu is usually completed with schnaps and beer which is consumed while singing drinking songs.

In GÃ¶teborg Midsummer is celebrated at Slottsskogen on Friday June 24th at 16.00. There you can take part in this Swedish tradition by listening to music and dancing around the maypole. And maybe you will even find seven different flowersâ¦