The semla has got a day of its own. So does the cinnamon bun. And on Friday, it is the waffle day. According to me it is a very important day that occurs on the 25th of March every year. Waffles are really good, especially when they are home made and a bit crispy. But why have they become so popular?

The reason the waffle day is in the month of March is that back in the days, when more or less all Swedes were farmers, the supplies of eggs and milk were getting better after the cold and dark winter. Eggs and milk are, along with flour, important ingredients in the waffles still today. Over the years, the ingredients have been varying. To make the waffles more festive, cream, sugar and butter were added and in the beginning of the 20th century the waffles were garnished with whipped cream and jam. It was a popular âfikaâ after the Sunday walk. The waffles are still gaining popularity.

There are a wide range of recipes. My favourite waffles are the ones that my mother makes using the below recipe. 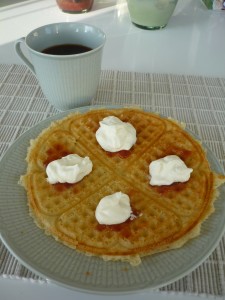 100 grams of butter or margarine

Melt the butter and let it cool down. Stir water, flour, milk and baking powder together to a smooth mixture. Add the cold butter. Heat up the waffle iron and but some butter in it to avoid the waffle from sticking to the iron. Repeat if needed later. Bake the waffles until they are golden yellow. Eat them (warm or cold) together with jam, berries, whipped cream, sugar or ice cream. The recipe is enough for about 10 waffles.

Why not impress your friends with some freshly made, crispy waffles on Friday? I am sure it will be much appreciated. And if you have not got an iron, try asking your neighbours if they might have one to lend you. Good luck!