The Native: Kanelbullens Dag and How to Make Cinnamon Rolls


October the 4th has, since 1999, been known as 'Kanelbullens Dag' in Sweden. Directly translated into English, it would be 'The Cinnamon roll's Day,' and, hardly surprisingly, we celebrate that day by eating cinnamon rolls. Now, we're currently in March, which is a long way from October, but I'm thinking that it wouldn't be fair leave out everyone who happens to come to Sweden during the spring and only stay for six months. So, in today's article, I thought I would share with you a wonderful recipe for this delishous, typically Swedish bun. You can also see me make some on the second episode of the Wonder Chef, now available on YouTube. 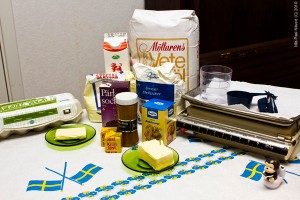 Notice:
If you have any recipies you would like to share, or have questions about Swedish food and recipes, please write about it in ourforums.