The Wonder Chef: How to Make Raggmunkar (Swedish Traditional Dish)


Among all sightseeing sites and experiences, there is food. The dish most widely associated with Sweden internationally, is perhaps Swedish meatballs with potatoes, brown sauce and lingon jam. This is a dish often found at, for example, IKEA stores worldwide, and it is a dish which has been mentioned in numerous films and television series, including the well-known SciFi series Babylon 5. So... I will not write anything more about it in this article. Instead I will turn to a less well-known Swedish dish called Raggmunkar. Most Swedes will of course know what it is, and once I describe it, I think that most of you will have a fairly good idea of what it tastes like even if you have never heard the name before.

Raggmunkar are basically pancakes with one major difference: potatoes. Yes, that is right, in addition to the flour, milk, egg and butter in regular pancakes, raggmunkar takes it one step further by adding grated potatoes to the list of ingredients. To further make the dish really Swedish, raggmunkar are eaten with lingon jam, and is not considered a desert (although personally I tend to treat them as desert). 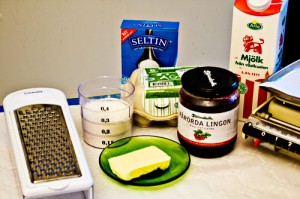 Put about 1dl of mixture in a frying pan, spread it evenly with a spatula and fry it. Keep in mind that raggmunkar contain potatoes and are thicker than ordinary pancakes, which means that they require more time in the frying pan than an ordinary pancake.

Good luck with the cooking, and I hope you will like them!

UPDATE:
The video has now been uploaded to youtube. The delay was due to problems during the encoding phase, which I had to redo three times (each taking about 5 to 6 hours).