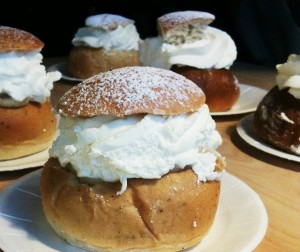 The Misi.se Test Panel is back for another season, this time kicking it off with a test of the famous Swedish âsemlaâ, which apparently is of Roman origin originally. You can read more about that later on in this article, but suffice it to say: we added the cream, and that makes all the difference! Although traditionally eaten only once a year, commercial interests have long since broken with this tradition, and the semla now a days appear in early January through at least the end of February. Weâve tried âsemlaâ from four different stores/bakeries â read on to see how it went!

But before we get to the results, Iâd like to briefly touch upon the background of the semla.


What is a semla?

A semla is a cardamom spiced bun cut in half much like a hamburger bread. In between the two halves is firstly a layer of almond paste, and secondly a thick layer of whipped cream. Icing sugar is sprinkled on top of it all to give the the bun a white and sweet coating.


Why only once a year?

In the past, Sweden observed the Catholic 40-day fast that finished at Easter every year. In order to prepare for the long fast, the Swedes would traditionally eat supremely filling food, much like the bears stock up on fat during the summer to survive the long winter in hibernation. The semla fit the bill perfectly, and so the Swedes would eat semla every year on the last day before the fast. This day is now remembered as âsemeldagenâ (the day of the semla), or âfettisdagenâ. The semla itself is sometimes referred to as âfastlagsbulleâ (bun of the fastlag), derived from âfastlagenâ which is what the period leading up to the fast is traditionally called. The end of the fastlag, and thus the 'semeldagen' of this year is on Tuesday 21st of February.


From where does it come?

Some sources suggest that the semla was imported from the Romans sometime during the 16th century. At that time, whipped cream was not part of the concept. A spiced bun with almond paste was all it was. It was however made with the finest of wheat flours, and consequently affordable only to the wealthy. Indeed, the name âsemlaâ is believed to be derived from the Latin word âsimilaâ, which means fine wheat flour. 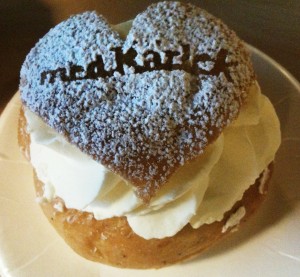 1) 7-Eleven (photo â right): Surprisingly, the winner of this test was also the cheapest among the âsemlaâ we tried. At 14 SEK, the 7-Eleven semla is half the price of the second cheapest semla in the test, which makes it great value for your money.

2) CederleÃ¼fs: Being the largest of the lot, having a spoon handy when eating may be advisable.

3) Ahlsgren: Probably the strangest of the lot, although not in appearance. The peanut-tasting almond paste was certainly a surprise, but despite the odd taste, itâs not a bad semla at all.

4) Brogyllen: A hole in the whipped cream and unexciting almond paste places this semla last in our test, although it should be pointed out that it was still very good. None of the semla tried today have been outright bad.

The Misi.se test panel is a mix of Swedish and International students. Although the members of the panel usually vary throughout the semester, the panel for this test consisted of seven people, of whom two were Swedes. It is important that the panel is International, as it is all about discovering the Swedish brands and flavours from an International perspective.

If you want to participate in the Test Panel, write to chiefeditor@misi.se