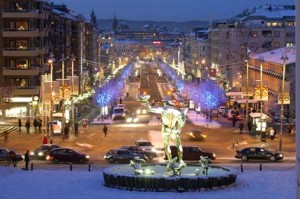 If you're a shopaholic then you will probably find the city's best shopping really quickly. Here's a simple guide anyway, just in case you need any help. You may come to notice that GÃ¶teborgs downtown is actually quite small, so some of these shopping areas sort of blend together. Nothing better than spending the whole day shopping downtown without ever having to take a rest on a bus or tram. These are just some of the main shopping places in town but wander around and discover your own favorite place to shop!

Nordstan (map)- The most obvious one. It's the biggest shopping center in Sweden. You'll find any kind of store as well as many restaurants and cafÃ©s in here. Check nordstan.se to find out more, or while you're shopping there just use one of their helpful touch-screen info guides. There's also a tourist center here. In area, Nordstan ranges from Brunnsparken almost to the harbor, and from Centralstationen to Ãstra Hamngatan, and with its entrances on all sides you can take the tram or bus to many stops. My fave is Brunnsparken though, since basically all trams and many busses stop there. Possibly useful info: There's a high tunnel from Nordstan to Lilla Bommen Torget (The harbor! The Lipstick Building!) and an under-the-street tunnel from Nordstan to Central Station. What a well-connected mall! Open Mon-Fri 10-20, Sat 10-18, Sun 11-17.

FrÃ¶lunda Torg (map)- Much like Nordstan in its size and variety. There are shops here that aren't in Nordstan (and vice versa) so you might want to check this one out too! One big difference is FrÃ¶lunda has a large HemkÃ¶p grocery store. Find a list of stores and more at frolundatorg.se. Something about this mall really reminds me of my "hometown" malls in the suburban-Midwest in the US. Very randomly I have encountered Americans every time I've been there too... Reminds me of home! It is very easy to get to; the tram stop FrÃ¶lunda Torg is right at the doors. You'll find electronic guides at this mall as well. Open Mon-Fri 10-19, Sat 10-18, Sun 11-17, Groceries every day 8-22.

Avenyn (map)- A main street more formally known as Kungsportsavenyn. If you walk all the way down Avenyn, you can start at GÃ¶taplatsen (where the Art Museum and main library are) and walk to Kungsportsplatsen, but you can go almost straight and follow Ãstra Hamngatan clear down to Brunnsparken. Along Avenyn you will find plenty of shops during the day and nightclubs during the night (funny how you never notice the shops at night nor the clubs in the daytime). You can even get an Avenyn guide at tourist centers. The store hours vary, but they are similar to mall times. Don't forget to check the side streets! Check avenyn.se for details!


Domkyrkan (map)- Yes, it's a church, but considered more of an area around the church... Many of the same stores that are at the other malls also have locations at Domkyrkan, but there are some shops unique to this area. All the little side streets between Kungsportsplatsen, Domkyrkan, and SÃ¶dra Hamngatan are full of little shops, and on the weekends the narrow cobblestone streets are full of people. There are also tons of hair salons here, a seemingly stronger concentration than in the rest of the city.

Haga (map)- If you're into cute little cafÃ©s and antique shops, check out GÃ¶teborg's beloved and charming Haga district! I like to say that the sun always shines in Haga, because every time I'm there, somehow there is sun shining on the little streets, despite GÃ¶teborg's cloudy norms. This unique area has upheld its 19th-century charm and people love it! Check this website for details, but since it's in Swedish I suggest you just go to Haga and find out for yourselves. Stops JÃ¤rntorget or Hagakyrkan. Follow the smell of charm and when you see little banners with little flags up across the streets, you know you're there.

LinnÃ©gatan (map)- Within walking distance from Haga, it is a long street with little boutiques and second-hand shops. Don't come here if you're looking for mainstream clothing stores, but if you want to pick out some gourmet cheese or an expensive pair of shoes, this is where to go! The choice of cozy cafÃ©s, restaurants and pubs is overwhelming on LinnÃ©gatan. It's also a charming street so don't miss it! It runs between LinnÃ©platsen and JÃ¤rntorget, other stops are Olivedalsgatan and Prinsgatan. More info on linneshopping.nu.

Take note that System Bolaget has its own hours and is not open whenever the mall is. Also, on major holidays many stores have different hours.

Comment with any other good shopping tips that I didn't mention! I don't have much experience but I hear that in Majorna there are also tons of cafÃ©s and second-hand shops, so do check that out as well. Try starting off at Chapmans Torg (map). Happy shopping! Don't spend too much money!

This is a series of ten podcasts designed to introduce you to the Swedish language. We apologize for the poor audio quality of the first three episodes.
Episode 1 - Word order and verbs.
Episode 2 - Nouns.
Episode 3 - Adjectives.
Episode 4 - "What is that?"
Episode 5 - "Weekdays and Time"
Episode 6 - "Weekdays and Time"
Episode 7 - Verbs for 'to shop'
Episode 8 - "Money and withdrawing money from a store"
Episode 9 - Tag-Questions and Asking for Opinions
Episode 10 - Swedish Months and Saying Farewell